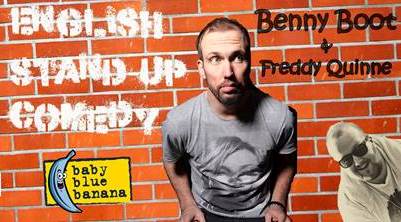 CHANGE OF PROGRAMME: BIG NEWS! One of the Netherlands top comedians, Jurg Van Ginkel, has just flown in to join our line-up for this week’s English comedy show! Jurg is hugely talented and is very experienced at performing to international audiences. Don’t miss the opportunity to see him and of course the amazing Benny Boot!

Live English Comedy returns to the Baby Blue Banana stage, in the guise of two fantastic performers, both performing in Bratislava for the first time. Headline act, Benny Boot, comes all the way from Australia, with a reputation almost as big as his journey! Freddy Quinne is one of the great rising stars of the British comedy circuit. Both have great experience with international shows and are ideal for our multi-national audience. 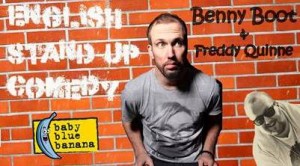 We return to Kafe Scherz, where it all began for Baby Blue Banana comedy, more than 7 years ago and we are delighted to be back! Benny Boot and Freddy Quinne Live in Bratislava! Tickets: €8 in advance, up to 11th November (Students €7) or €10 after that date and at the door (Students €9). Tickets on sale now. Go to www.Danube-Events.com/tickets/ to buy yours now. The show starts at 8pm, so make sure you get there early.

Australian comic Benny Boot has built a huge following around the world, with more than a decade of top-class performances behind him. In the USA, he was a finalist in NBC’s “Last Comic Standing”. In the UK, he is already a veteran of multiple Edinburgh Fringe Festival shows and has headlined all the major comedy clubs in the country.

Boot delivers his jokes in a unique style on a variety of strange topics. His engaging persona and material keeps the laughter rolling through the entire show.

Benny Boot is seen as one of the finest and most innovative joke writers in the business. He stormed the Altitude Comedy Festival in March and outshone many of the huge stars in the line-up there, such as Tim Minchin, Jimmy Carr and Frankie Boyle, as the act that got everyone – audience, critics and comics – buzzing.

Here are a few comments about Benny Boot from some of the biggest names in comedy:
“Benny Boot is the real thing. Charming, disarming, and proper f***ing funny”
TIM MINCHIN
“Benny Boot offers something unique. I’m not sure exactly what it is, as I couldn’t concentrate – I was laughing too damn hard”
RUFUS HOUND

And from the media:
“Boot possesses an incredible sharpness of wit”
EDINBURGH GUIDE
“Boot’s mind is a fecund and strange place and he has some of the most memorable jokes of the Fringe to prove it”
SPOONFED
“Brilliant gags”
THE GUARDIAN

Based in Manchester, England, award-winning comedian Freddy Quinne has seen a meteoric rise into some of the biggest comedy clubs in the UK. Quinne couples clever, well placed gags together with a vulnerable persona for a unique experience. His willingness to break away from his set and involve the audience leads to an engaging and memorable evening, with every performance different and backed up with frantic energy and raw emotion.

Advance reservations are strongly recommended to guarantee seats. Reservations can be made by emailing: DanubeEvents@Gmail.com