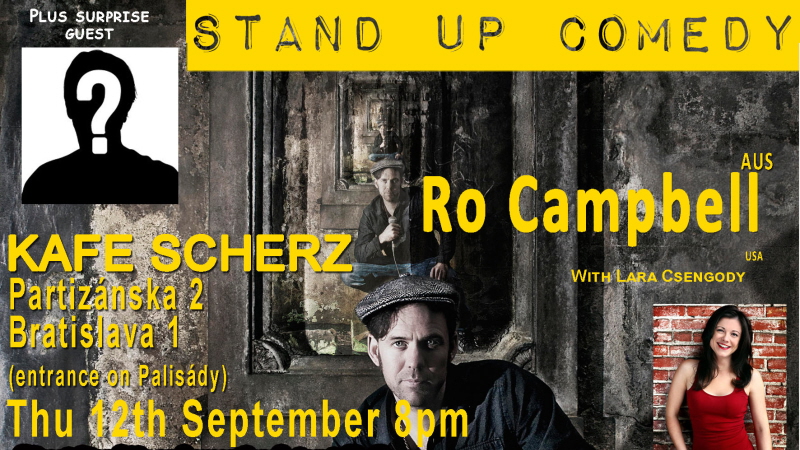 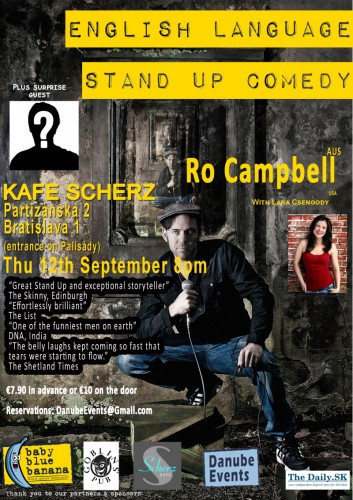 The Baby Blue Banana English Comedy shows are entering their fourth year in Bratislava and next week’s show will be a special celebration at Kafe Scherz. Australia’s Ro Campbell will be headlining the show, right after having huge success at the Edinburgh Festival Fringe. A multi-award-winning comedian, Campbell is one of Australia’s greatest comedy exports and one of the biggest names in comedy ever to appear in Bratislava. America’s hilarious Lara Csengody will be flying in to open the show and we are promised some very special surprise guests too. There will also be a celebration party after the show.

Ticket prices have been lowered too, with an advance-purchase price of just €7.90 available in person from Goblins Pub, Dunajská 29 or by purchasing online. If tickets remain, they will be available at the door for €10.

Ro Campbell’s relentlessly entertaining and award winning brand of cheeky, slightly dark, humour has wowed audiences everywhere from Adelaide to Bangalore, Helsinki to Singapore and many places in between. He has performed to packed audiences at the last 8 Edinburgh Fringe festivals and made The Scotsman’s pick of Best Jokes of The Fringe. He has written for British TV and Radio, has featured regularly on BBC Radio’s Comedy Cafe, and, in 2010, he was controversially crowned Scottish Comedian Of The Year, despite being Australian!

What the critics say about Ro Campbell:
“Great Stand Up and exceptional storyteller” – The Skinny, Edinburgh
“Effortlessly brilliant” – The List
“One of the funniest men on earth” – DNA, India
“The belly laughs kept coming so fast that tears were starting to flow.” – The Shetland Times
“Shoots straight to the funny bone” – Beat, Australia
”Silly, slightly unhinged fun” – Gigglebeats, Edinburgh 2012
“Top Notch” – Scotsman

Originally from St. Louis, Missouri, Lara Csengody eventually settled in Los Angeles, where she began to take the comedy circuit by storm! With live performances everywhere from small clubs to entertaining troops on military bases, Lara quickly became a great success. TV and radio appearances followed on shows for SpikeTV, A&E and CBS. Her quick wit and high-energy style are guaranteed to keep everyone on the edge of their seats when they´re not falling off laughing! So now it´s time to let Lara loose again on Bratislava. Hold on to your seats and enjoy the ride!

There will also be at least one, maybe more, special guest appearances who will be joining in the celebration and providing even more laughs!