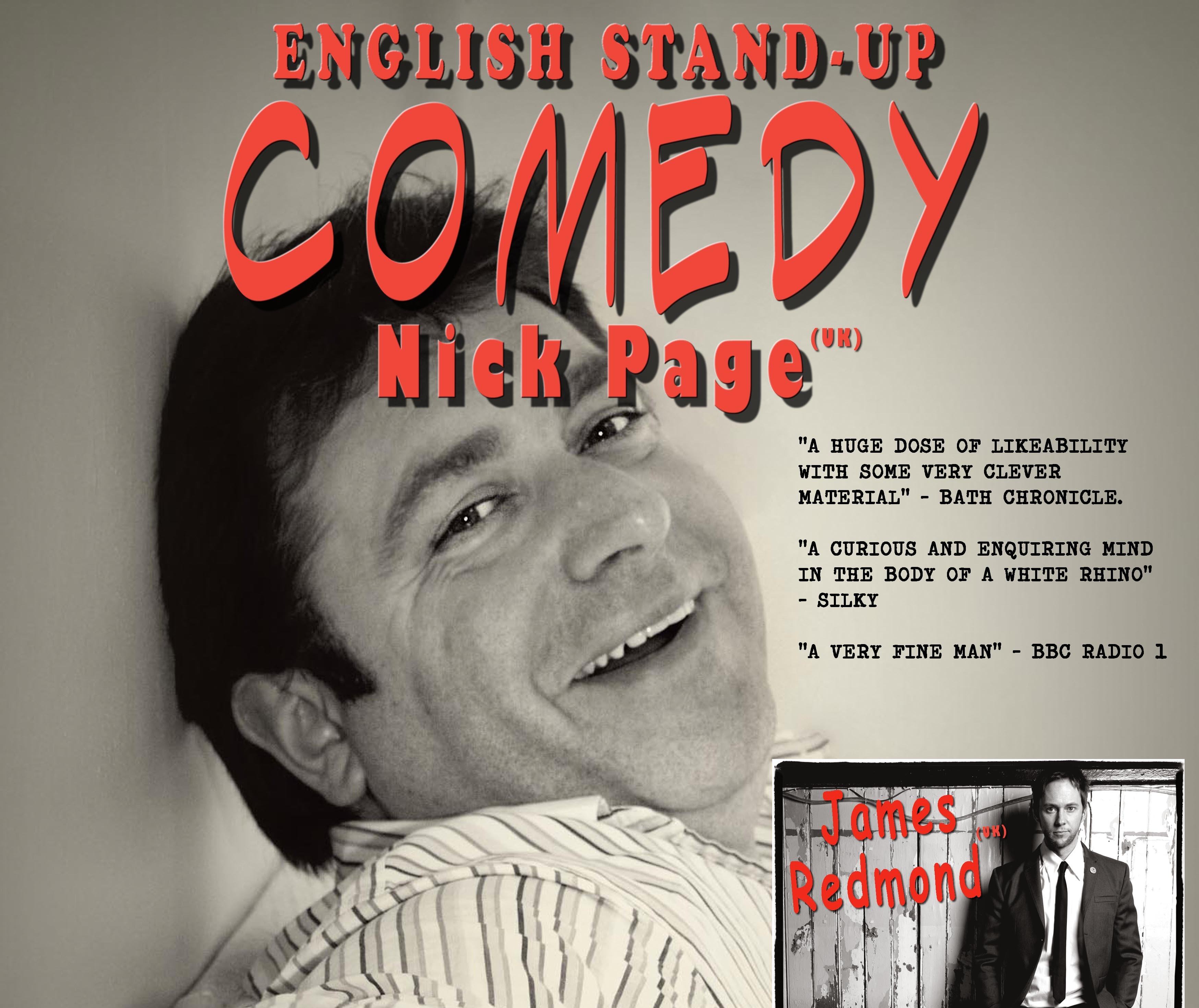 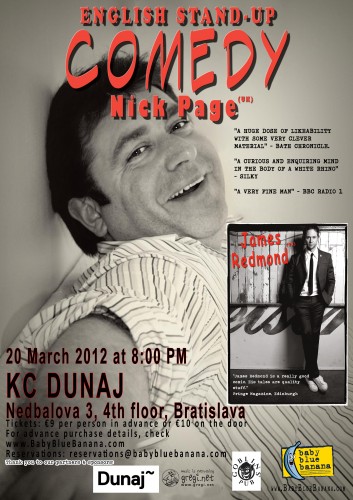 This month’s show brings two of England’s best comedians to the Bratislava stage. Nick Page is acknowledged as one of the finest storytellers on the UK comedy circuit, whilst James Redmond has made an impressive transition from being one of the UK’s most popular TV actors to a thoroughly entertaining stand-up comedian.

Nick Page headlines many of the UK’s biggest comedy clubs and has performed to international audiences all over the world, from Afghanistan to China and Germany to Greece. He performed for Baby Blue Banana in Budapest in 2010 with great success, so we are delighted to finally get him back with us to perform in Bratislava for the first time.

Nick Page has lived a remarkably colourful life, progressing from working in real estate to becoming one of Britain’s most popular daytime TV presenters and then moving back down-hill as a convicted forger and eventually turning to the stand-up comedy circuit! His storytelling skills are enhanced by the fact that they are largely true tales of his own remarkable life, including the kind of stories most people would want locked in the darkest cupboard.

What the critics say about Nick Page:
“One of the top 5 comics on the UK circuit” Stylists Magazine
“A huge dose of likeability with some very clever material” – Bath Chronicle.
“Managed to combine a ready wit with his extensive knowledge” – The Stage
“A curious and enquiring mind in the body of a white rhino” – Silky
“A very fine man” – BBC Radio 1

James Redmond made his name as a model and actor in two of the UK’s most popular TV shows, the BBC’s Casualty and Channel 4’s Hollyoaks, as well as presenting ITV’s top music/youth shows ‘SM:TV’ & ‘CD:UK’, on which he had the unenviable task of replacing the country’s most popular TV stars Ant and Dec. He has appeared on numerous other prime-time TV shows and built a reputation as one of the country’s biggest teen “heart-throbs”. Despite all that success, James decided to give it all up and follow his dream to be a stand-up comedian. So here he is, hitting the pinacle of his new career by appearing on the Baby Blue Banana stage in Bratislava! James has risen rapidly to become a great success on the stand-up circuit in the UK and we are delighted to have secured his services for this show.

What the critics say about James Redmond:
“James Redmond is a really good comic. His tales are quality stuff.” – Fringe Magazine, Edinburgh
“A dry, slick and subtle stand-up who delivers unexpected twists and turns” – Observer

We expect this show to be extremely popular, so we strongly recommend making reservations early to avoid disappointment. Tickets are just €9 per person in advance or €10 on the door. Tickets can be purchased online in advance with a 10 percent discount! Just go to: www.bratislava.babybluebanana.com/tickets to get your tickets online now.

If you prefer to pay €10 cash at the door on the night, you can still reserve your seats by simply emailing: reservations@babybluebanana.com to let us know how many seats you need and preference you have for location.