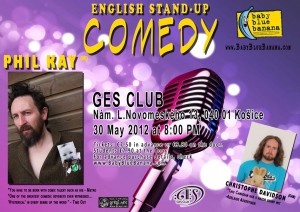 www.kosice.babybluebanana.com/tickets.html
or from GES Club or MIC Dargov – Information Centre

We return to the new home of comedy, GES Club, for another fantastic line-up of live English comedy. This month, we bring you one of the great veterans of British comedy, the amazing Phil Kay, and in a change to the advertised comedian Rob Collinis (UK)
Phil Kay burst on to the comedy circuit in 1989, when he was voted “Best New Act” in the prestigious “So You Think You’re Funny” awards. By 1993, he was nominated for the Perrier Award and in 1994 was voted best stand-up at the British Comedy Awards. In 1997, he began his first TV series “Phil Kay Feels” on Channel 4. With 22 Edinburgh Festivals and 18 Glastonbury Festivals behind him, it is fair to say that Phil Kay is now one of the “veterans” of British comedy, yet he retains the same energetic, manic style which brought him so much attention at the start of his career.

To be at one of Phil’s shows and expect simple stand-up would be a big mistake. Anything can happen and invariably does! Phil’s comedy is a unique blend of energy, improvisation and leaps of imagination that take his audience on a joyride they’ll never forget. Even Phil has no idea what might happen when he unleashes his crazy brand of improvised comedy mayhem. He possesses the rare gift of creating a space where audiences feel like they are kids again, all taking part in a practical joke. Phil Kay is stand-up comedy’s answer to spontaneous human combustion,­ a rare, explosive and always surprising phenomenon that simply cannot be contained in a box. Over the years he has completed several highly successful international tours, travelling the length and breadth of the globe administering his special blend of comedy genius.

What the critics say about Phil Kay:
“Phil’s show is a heady mix of Hard Core Positivity, up to the minute topical notices and sing songs… Warning: If you like straight stand-up in a suit, stay away.” – underbelly.co.uk
“Never has there been such a welcome blur of genius and nutter” – London Evening Standard
“You have to be born with comic talent such as his” – Metro
“One of the greatest comedic odysseys ever witnessed… ‘Hysterical’ in every sense of the word” – Time Out

This will be a completely non-smoking venue.

Following the huge success of the April show with Jonny Awsum and Luke Graves, we expect this show to be even more popular, so we strongly recommend making reservations early to avoid disappointment. Tickets are now reduced at just €7.50 per person in advance or €9.90 on the door, with students’ tickets at €7.90 at the door. Tickets can be purchased online in advance or with with cash from the venue, GES Club or the MIC Dargov Information Centre. Just go to: www.kosice.babybluebanana.com/tickets.html to get your tickets online now.
If you prefer to pay in cash at the door on the night, you can still reserve your seats by simply emailing: reservations@babybluebanana.com to let us know how many tickets you need.