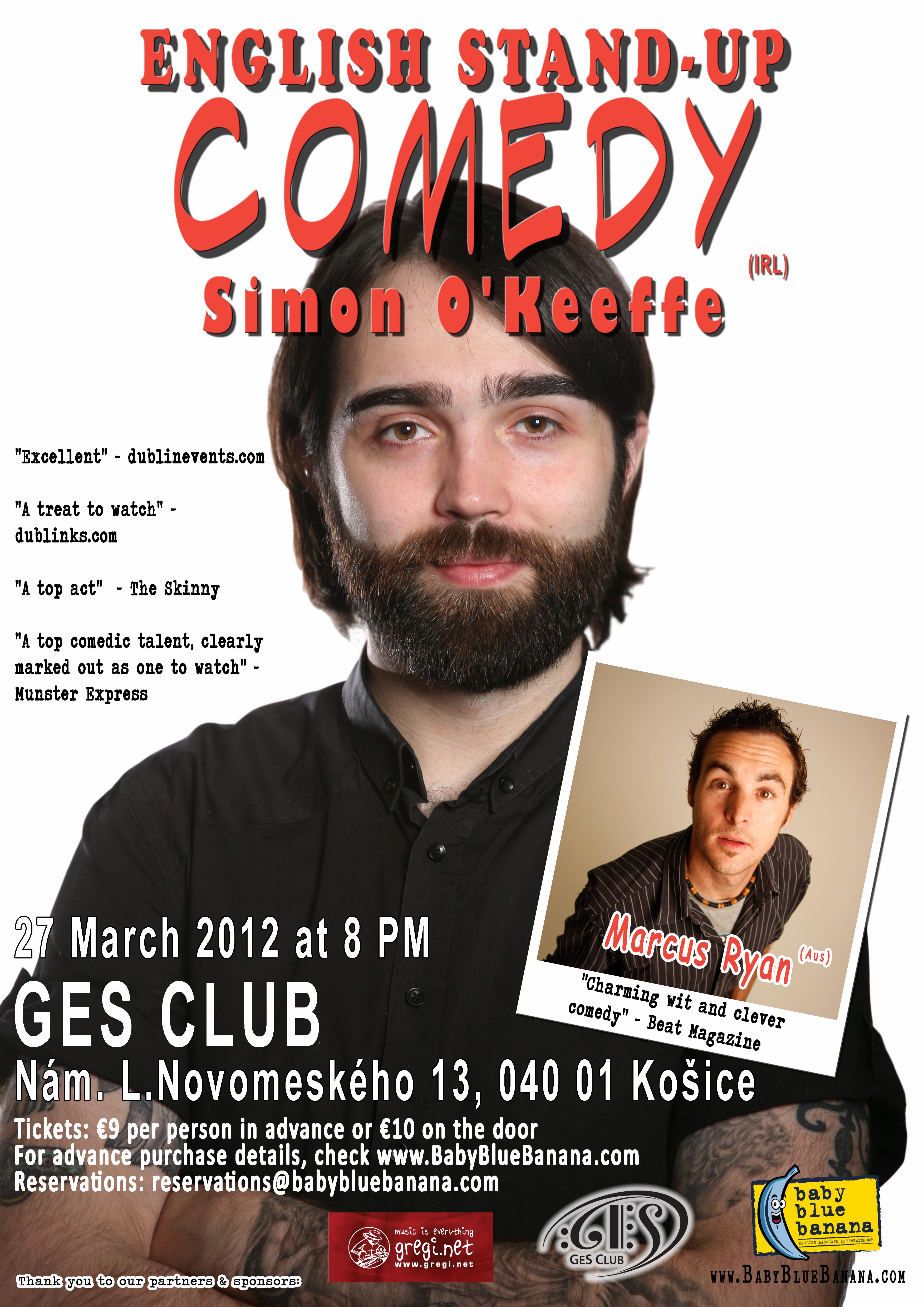 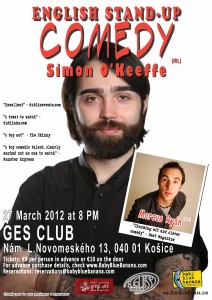 After the great success of our February show, it’s now time to announce the line-up for the next big comedy show at GES Club and these guys certainly will not disappoint! Simon O’Keeffe is one of Ireland’s most sought after comedians who has risen rapidly to the top of his profession and is now in great demand in Ireland, the UK and around the world. Australia’s Marcus Ryan has already travelled the world performing comedy and managed to entertain audiences in six continents!

Simon O’Keeffe has been the resident host of Dublin’s top comedy venue, the Capital Comedy Club, for the past seven years and has headlined all of Ireland’s major comedy venues, most of the UK’s and an increasing number around the world. Simon has also written and appeared in some of the highest rated comedy shows on Irish television. An exciting and edgy act, equal parts charming and provocative, Simon is never afraid to offer his opinion on a wide range of subjects. His relaxed style and expert improvisation skills make him an ideal headline act for international audiences.

What the critics say about Simon O’Keeffe:
“Excellent” – dublinevents.com
“A treat to watch” – dublinks.com
“A top act” – The Skinny
“DEFINITELY not one to be missed” – culch.ie
“A top comedic talent, clearly marked out as one to watch” – Munster Express

Australia’s Marcus Ryan is a true globe-trotting comedian who has performed in so many countries around the world that it’s hard to know where his real home is. One thing’s for sure, he’s right at home on stage. A laid back yet engaging stage presence, Marcus charms his audiences with tales from the road and a sharp wit. After a successful career as an actor and radio presenter, Marcus decided to concentrate on travelling the world performing live comedy. More than 30 countries later and the plan has been a great success, with audiences as far afield as Las Vegas and Guatemala enjoying his unique brand of one liners, accents and characters, travel stories and observations.

What the critics say about Marcus Ryan:
“He does everything a stand-up’s supposed to do, this genial chap absolutely looks and acts the part” – Chortle
“Great observational comedy. We were treated to unpretentious, informal, belly-laughs-a-minute stand-up with hilarious anecdotes” – Three Weeks
“Charming wit and clever comedy” – Beat Magazine

Last month’s show with Christian Schulte-Loh and Joe Eagan was a great success and we expect this show to be equally popular. So we strongly recommend making reservations early to avoid disappointment. Tickets are just €9 in advance or €10 on the door. To buy your tickets in advance, just go to: www.kosice.babybluebanana.com/tickets.html
If you prefer to pay €10 at the door, we recommend that you reserve your seats in advance by mailing reservations@babybluebanana.com