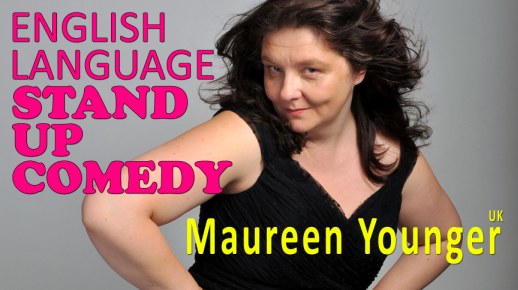 SHOW CANCELLED – message from organisers: Unfortunately, due to circumstances beyond our control, Thursday’s comedy show with Maureen Younger at Kafe Scherz has been cancelled. Danube Events apologises sincerely for any inconvenience caused. Those who have already purchased tickets will receive an email shortly from Danube Events, regarding the choice of getting a full refund or transferring their booking to a future show. Those who choose to transfer their booking will also be entered into a free prize draw to win one of four annual season cards, providing free entry to a full year of comedy shows, quiz nights and other events.

English comedy returns to Kafe Scherz on Thursday 23rd May, after both this year’s previous shows sold out completely. This month’s headline comedian is Maureen Younger, one of Britain’s most talented female comedians.

Opening the show will be Neil Morgan, from Ireland.

Maureen Younger returns to Bratislava after her popular and very successful performance at Goblins early last year. Maureen Younger’s “full-on” approach and expert timing blend perfectly with her warm and likeable personality to guarantee that every audience member is drawn in to enjoy every word. A talented linguist, Maureen has performed live comedy in Spanish, French and German, as well as her native English. There are few comedians with Maureen’s expereince of performing for international audiences and constantly finding new ways to make them laugh. Originally from Scotland, Maureen is now based in London but has lived in Vienna, Moscow and Kiev and also has her own regular comedy club in Berlin. She is a regular on BBC Radio and is also a talented actress in multiple languages. She can be seen playing a German housewife in the BBC/HBO TV series Band of Brothers!

What the critics say about Maureen Younger:
“Warm, funny and instantly likeable” – BBC Radio “I certainly thought she was hilarious” – The Voice “Engaging and Funny” – Three Weeks “Maureen Younger – a comic insight that can open up a need to laugh out loud, even if you didn’t want to” – Hackney Empire “Very entertaining… SO funny!” – Amused Moose 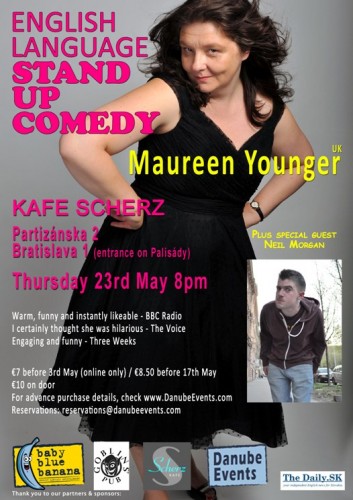 Ireland’s Neil Morgan is quite a recent arrival to the world of stand-up comedy, after building a reputation as an extremely talented comic actor.
Like Maureen Younger, Neil is comfortable and experienced performing to international audiences having spent time living and performing in other countries, including the Czech Republic, where he is currently based. A talented comedy writer and performer, Neil is an exciting new talent.

Tickets are available in advance, with a discounted price of €8.50 for those buy up to 17th May. After that and on the door, the price is €10.
Tickets can be purchased online from: www.Tickets.DanubeEvents.com and reservations can be made by emailing: reservations@DanubeEvents.com