The BabyBlueBanana company has another evening of English comic entertainment prepared for this Wednesday at Kafe Scherz in Bratislava.

English comedian Matt Price is one of the great comedy story-tellers. With a colourful past, including his time as a professional boxer, he has a wealth of stories and anecdotes to deliver which promise to keep the audience both fascinated and entertained. Matt is flying over form England to perform exclusively for Baby Blue Banana in Bratislava. 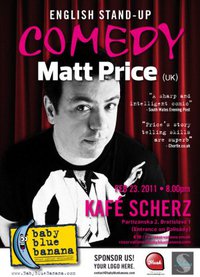 Tickets are just €10 each and can be reserved in advance by emailing reservations@babybluebanana.com. The January show, with Damian Clark, was completely packed, so don’t forget to make your reservations early to avoid disappointment.

What the critics say:
“A sharp and intelligent comic” – South Wales Evening Post
“Price’s story telling skills are superb” – Chortle.co.uk
“A high-octane display… he didn’t let the energy drop for a second” – Gagging For It Comedy
“Has the ability to entertain just by being himself” – Gloucester Guildhall Comedy Club

Matt Price is an unusual comedian because he doesn’t actually tell jokes! His act is based entirely around a series of stories and anecdotes.

Originally from Cornwall in England’s deepest South West, Matt comes across as a genuinely likeable man, who has the ability to hook his audience and keep them on board throughout his performances.

With an excellent support act and plenty of surprises, this promises to be a superb evening of entertainment.