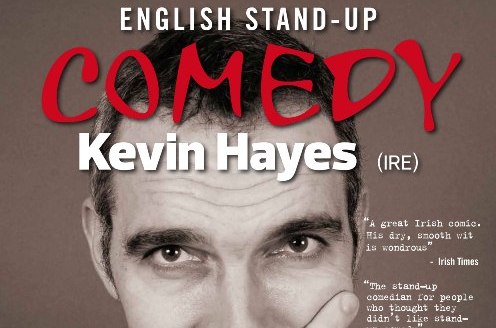 We continue our monthly shows with two more top international acts flying over specially to perform for us at KC Dunaj, in association with Expanzia.sk

Kevin Hayes is one of the busiest, most experienced and popular comedians in Ireland, who has been entertaining in his home country, together with the UK and around the world for many years. After a hugely successful September tour in Hungary for Baby Blue Banana, we are absolutely delighted that Kevin has agreed to perform again on the Baby Blue Banana stage in Bratislava.

With numerous TV credits to his name and even a regular column in Ireland’s biggest newspaper, The Irish Post, Kevin Hayes has been one of Ireland’s top comedy talents for almost 20 years. His brand of topical humour, dry wit and mild satire are guaranteed to appeal to any international audience. He has a particular skill in turning situations which really shouldn’t be funny in to great moments of humour. A natural entertainer and engaging character, Hayes puts his audience at ease and then hits them with a killer line when they least expect it.

What the critics say about Kevin Hayes:

“He is insightful, intelligent, and incredibly funny” – Edinburgh Evening News

“The best thing about Kevin Hayes is that his jokes are really funny, something which some comics think is not as important as being clever” – The Stage

Toby Muresianu has come all the way over from California to perform for us and we are delighted to have persuaded him to come. His style is sharp and intelligent but relaxed and self-deprecating. Toby started stand-up while in college studying computer science and psychology. Drawing from that hilarious background, he wins over audiences with smart but irreverent material on politics, relationships, and pretty much everything except computer science and psychology. He has performed all over the world as well as numerous appearances on TV and radio in the US.

He has appeared in Walt Disney’s Underdog and worked for National Lampoon Radio, amongst many others.

Our MC will be popular Slovak comedian Milan Sedliak, who manages to combine his self-deprecating humour  with confident delivery.

September’s show starring James Dowdeswell and Pat Burtscher was a great hit and we expect this show to be extremely popular, so we strongly recommend making reservations early to avoid disappointment. Tickets are just €9 per person in advance or €10 on the door. Tickets can be purchase online in advance via www.babybluebanana.com. Those who prefer to pay in cash at the door can still reserve seats by simply emailing: reservations@babybluebanana.com to let us know how many tickets you need.

Baby Blue Banana is Central Europe’s leading promoter of English language entertainment, bringing comedy, theatre, live music, quiz nights, parties and much more to audiences across the region. Now in its third year of operation, Baby Blue Banana has expanded successfully from its initial base in Budapest to launch successfully in 5 more locations, which also include Prague and Brno. The comedy nights take place in Bratislava at least once per month. Full details of Baby Blue Banana events can be found at our website: www.BabyBlueBanana.com. In the coming weeks and months, Baby Blue Banana will be launching in 8 more European cities.