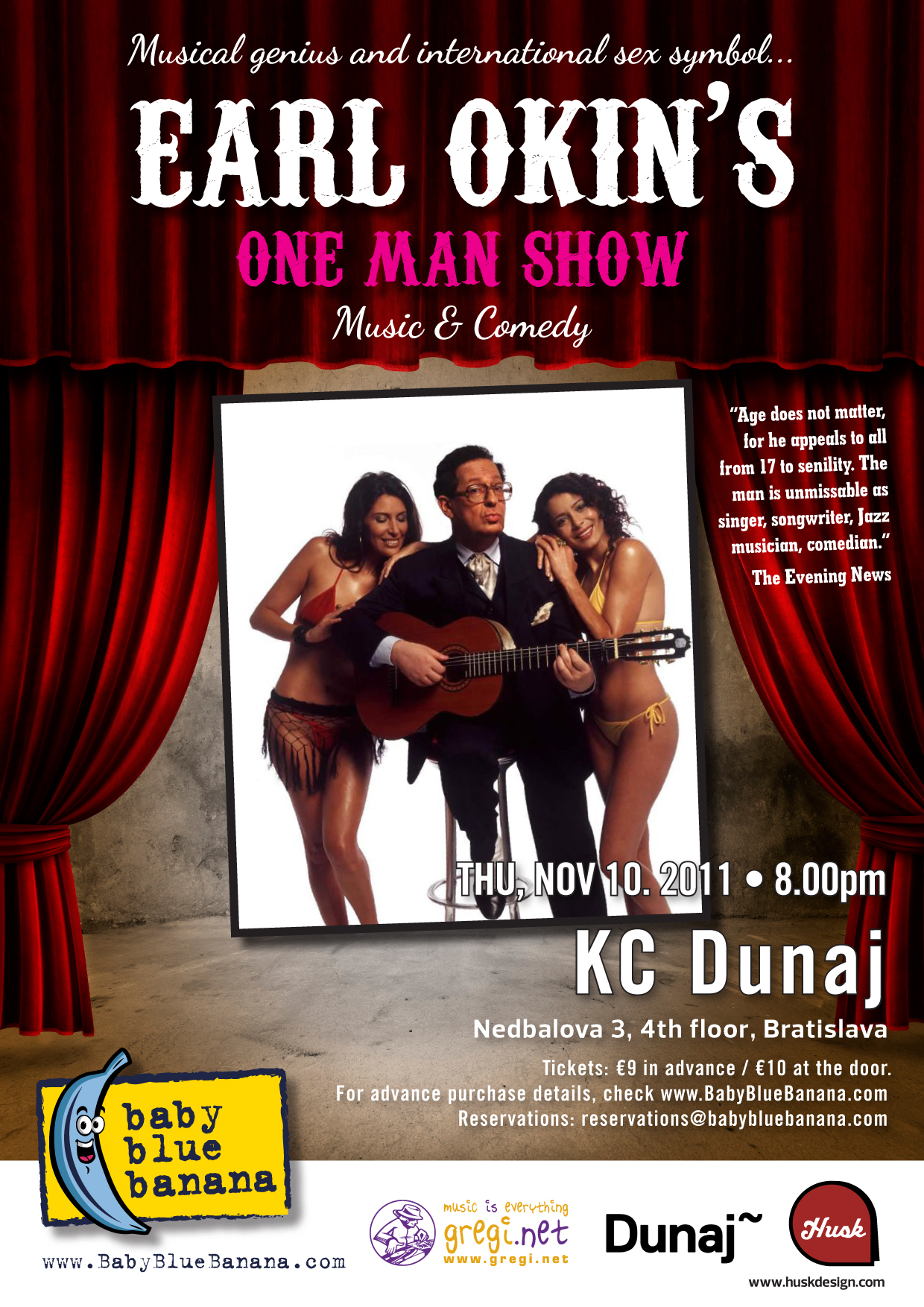 The Baby Blue Banana brings us a special act this week, with highly-acclaimed one-man show of Earl Okin. Musical genius and international sex symbol, and one of the most popular performers ever to appear on the Baby Blue Banana stage, Okin will be making his first ever visit to Bratislava.

Earl is one of the true greats of British music and comedy. He combines his genuine world-class talent for jazz and bossa-nova with a parallel talent for comic songs and hilarious quips. It is impossible to describe Earl Okin as any particular genre. He is not really a stand-up comedian but does perform superb comedy. His musical prowess is exceptional but also covers multiple styles of music. Earl Okin is simply unique!

Earl is a veteran of the last 6 decades of music and comedy and many of the greatest comedy and musical talents in the world rate him as their own personal favourite, including Eddie Izzard, Billy Connolly, Sacha Baron Cohen, Frank Skinner, Van Morrison and Paul McCartney. When the Beatles split and Paul McCartney formed his new band Wings, it was Earl he called to be the support act on his first post-Beatles tour! In the 1960s, he was recording on the same record label as the Beatles, whilst some of the biggest names of that era, such as Cilla Black and Georgie Fame were singing Earl’s songs. He still holds the record for performing the most consecutive years at the Edinburgh Festival Fringe, whilst at the same time, he is one of the biggest stars of Bossa Nova music in Brazil!

If ever a performer was able to bridge the generations and entertain everyone, Earl Okin has that unique talent. This performance will be a showcase of both Earl’s musical talent and his great humour. This is a show that nobody should miss!

What the critics say about Earl Okin:

“Okin is a true original; a distinctive, eccentric figure on the stand-up circuit since before such a phrase even existed.” – Chortle

“Age does not matter, for he appeals to all from 17 to senility. The man is unmissable as singer, songwriter, Jazz musician, comedian.”– The Evening News

We expect this show to be extremely popular, so we strongly recommend making reservations early to avoid disappointment. Tickets are just €9 per person in advance or €10 on the door. Tickets can be purchased online in advance via www.babybluebanana.com or in person from Goblins bar, Dunajska 29. Those who prefer to pay in cash at the door can still reserve seats by simply emailing: reservations@babybluebanana.com to let us know how many tickets you need.

Baby Blue Banana is Central Europe’s leading promoter of English language entertainment, bringing comedy, theatre, live music, quiz nights, parties and much more to audiences across the region. Now in its third year of operation, Baby Blue Banana has expanded successfully from its initial base in Budapest to launch successfully in 5 more locations, which also include Prague and Brno. The comedy nights take place in Bratislava at least once per month. Full details of Baby Blue Banana events can be found at our website: www.BabyBlueBanana.com. In the coming weeks and months, Baby Blue Banana will be launching in 10 more European cities, including Nitra, Kosice and Vienna.