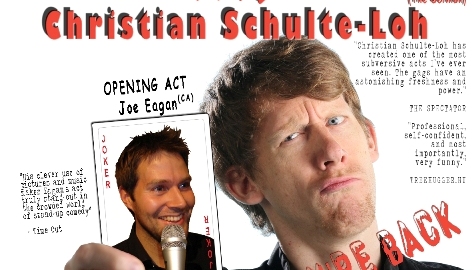 Yes, it’s not a joke, we really are bringing you a German comedian (in English)! He’s blond, he’s two metres tall, he’s German and he’s sorry! Award-winning international comedian Christian Schulte-Loh says about his country: ‘Don’t judge a book by its cover – unless it’s a German passport.’ Opening the show will be Canadian comedian, Joe Eagan, who has a very unusual act indeed. 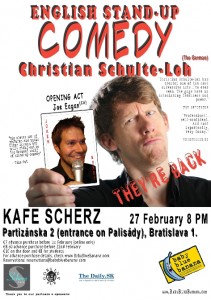 Christian Schulte-Loh was the first comedian ever to perform for Baby Blue Banana in 2009, when he previewed his Edinburgh Festival show for that year in Budapest. He was also the first comedian to perform for Baby Blue Banana in Bratislava at Kafé Scherz in 2010. Little did we know that his Edinburgh show would shoot him to stardom in the UK and around the world, with a string of sell-out shows at Edinburgh followed by a string of successful shows around the world, working alongside some of the biggest names in comedy. He has toured in North America and around Europe with great success too and has headlined some of the most celebrated comedy clubs in the UK, such as London’s Comedy Store.

A year ago, Christian returned to a triumphant reception with a hugely popular show at KC Dunaj, alongside Joe Eagan. We are delighted to bring them both back again to Bratislava and back to where it all began for Christian and for us at Kafé Scherz.

What the critics say about Christian Schulte-Loh:
“Christian Schulte-Loh has created one of the most subversive acts I’ve ever seen. The gags have an astonishing freshness and power.” – The Spectator
“A funny German – The only one!” – KKunst, Belgium
“Great energy, great personality!” – The Comedy Store, London
“I was unsure that a German comedian would be funny but Schulte-Loh proved me wrong and he was hilarious. I’d happily pay to see him again and highly recommend going to see him.” – Cardiffblogger

Canada’s Joe Eagan brings his unusual show back to the Baby Blue Banana stage after opening successfully for Christian Schulte-Loh a year ago. He combines stand-up comedy with his own unique brand of “sit-down comedy”, including the use of pictures and music. He is a regular performer to international audiences and has appeared all over the world, even using his impressive linguistic skills to entertain in multiple languages, such as Swedish! He prides himself in making every show different and appropriate to the audience.

What the critics say about Joe Eagan:
“His clever use of pictures and music makes Eagan’s act truly stand-out in the crowded world of stand-up comedy” – Timeout

Our most recent show in December was described by one reviewer as: “The 2012 Standup Comedy season ended with a bang… one of the best Baby Blue Banana shows of the year.” After the success of that show, we expect the first show of 2013 to be extremely popular again, so we strongly recommend making reservations and buying tickets early to avoid disappointment.

Tickets are available now for €8.50 until 22nd February. from:www.tickets.DanubeEvents.com. After that, the price is €10. Those who prefer to pay in cash at the door can still reserve seats by simply emailing to reservations@DanubeEvents.com