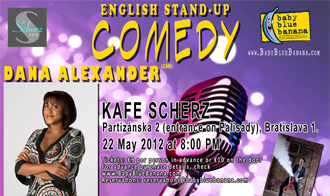 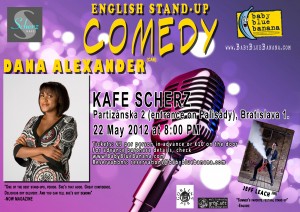 We are delighted to return to our original home at Kafe Scherz for another great evening of comedy in Bratislava with two great comedians. Dana Alexander, one of Canada’s most outspoken and hilarious women, has packed her bags for Europe and is currently taking the comedy circuit by storm. Jeff Leach is one of the most familiar and in-demand faces on British TV currently. We are extremely lucky to have persuaded both of these top performers to take time out to perform for us in Bratislava.

Tickets are just €9 in advance or €10 on the door. Tickets can be purchased online in advance from: http://www.bratislava.babybluebanana.com/tickets.html or you can buy them with cash from Kafe Scherz or from Goblins’ Pub at Dunajska 29. There is a very strong chance that this event will be a completely full house, so we recommend strongly that you reserve your seats in advance by emailing: reservations@babybluebanana.com.

The only black female comedian that was working on the circuit in Canada, Dana Alexander’s comedic style is both refreshing and irreverent, drawing her material from her diverse lifestyleand her crazy Jamaican family. This is a lady not to be missed! She brings a refreshing change to the comedy scene while her own home sensibilities endear her to a wide variety of audiences. She is a comic you definitely do not want to miss. Dana began her comedy career at the tender age of 18 and quickly became a regular fixture on the Canadian Comedy circuit, resulting recently in her own one hour comedy special on the country’s number one TV Stand-up show Comedy Now. Dana draws her material from raw life experience with an original and hilarious outlook.

Dana talks about everything from family to sex to culture with a down-to-earth and world sensibility. Her unique ability to see the insanity on our every-day lives is what endears her to a wide variety of audiences all over the world.

She was voted in the “Best Discoveries” by Canada’s renowned Now Magazine in 2006 and has since been included in their “Best Of” issues three years in a row, easily making her one of Canada’s hottest emerging young comedians.

What the critics say about Dana Alexander:
“One of the best stand-ups, period. She’s that good. Great confidence. Delicious dry delivery. And you can tell she’s got demons” – Now Magazine
“Canada’s hottest emerging young comedienne” – Comedy.co.uk
“An engaging likeability on stage” – Chortle

Jeff Leach is a young man on his way to world domination! Combining a career as a stand-up comedian, TV and radio presenter and actor, Leach will be a familiar face to anyone who has watched British TV recently. Currently presenting the BBC’s National Lottery show, he has also presented “Big Brother’s Big Mouth”, T in the Park, Celebrity Scissorhands, the V Festival and Comic Relief, amongst many others. As an actor, he has performed with the Royal Shakespeare Company.

As a comedian, he is a master of improvisation and has won numerous prestigious awards and performed sell-out shows at the Edinburgh Festival. He performs his own opulent and revealing brand of stand up comedy.

What the critics say about Jeff Leach:
“A comedic tour-de-force… never less than hilarious” – Three Weeks
“Jeff Leach has a brilliance in the way he writes and performs that at times is relentless”
– The New Current
“Last summer’s favourite festival stand-up”
– Esquire Magazine
“Leach is a black-clad Svengali-esque orchestrator of a mini breakdown”
– Daily Mail
“He’s hilarious and he’s a hottie”– Heat Magazine
“Truly entertaining, highly recommended”
– Time Out

We expect this show to be extremely popular, so we strongly recommend making reservations early to avoid disappointment. Tickets are just €9 per person in advance or €10 on the door. Tickets can be purchased online in advance with a 10 percent discount! Just CLICK HERE to get your tickets online now or you can buy them with cash from Kafe Scherz or from Goblins’ Pub at Dunajska 29.