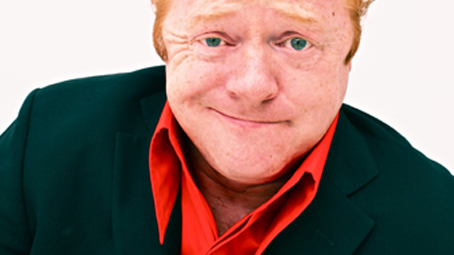 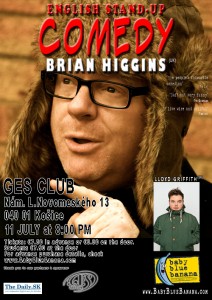 Baby Blue Banana returns to Košice for the latest in our series of monthly English-language Comedy nights.  We are the only promoters who will regularly bring top English-speaking comedians over to Košice from the UK, Ireland and elsewhere to perform.

Buy from the venue (GES Club) or from MIC Dargov – Information Centre.

Reservations can be made by emailing: reservations@babybluebanana.com

We return to GES Club for another fantastic line-up of live English comedy. This month, we bring you one of the most popular comedians on the British comedy circuit, Brian Higgins, and one of the biggest new stars, Lloyd Griffith.

Brian Higgins is one of the most experienced headline acts in British comedy. He moved to London in his teens from a small fishing village in central Scotland. Armed only with a penknife, catapult and a bag full of tadpoles he set out to make his fortune. Twenty years later he still has the penknife. Brian has a real passion for comedy, and it shows in an impeccably delivered, cheeky, upbeat set, which never fails to deliver the goods.

Higgins mixes topical material with well crafted stories of fatherhood, pregnancy and all related subject matters. He  has performed all over the world and was one of the first comedians to perform for Baby Blue Banana in Budapest in 2009. We have been trying to get him back ever since! So we are delighted to bring him for his first ever visit to Slovakia. He has had countless appearances on radio and numerous TV shows, as well as starring with Al Murray in the award-winning film Pub Fiction.

What the critics say about Brian Higgins:

“Daft but very funny” – The Guardian.

“A live wire and skilful” – Time Out

Lloyd Griffith has quickly established himself as one of the most natural, brightest and original comedians in the UK. Grimsby-born Lloyd regularly performs at some of the largest clubs in Britain. Before becoming a comedian, Lloyd was a professional singer and still performs as a choral singer in the choirs of Westminster Abbey and Windsor Castle, amongst others. In the past, he has sung backing vocals with the Bee Gees and on live television with Dudley Moore! He  certainly has unique skills for a comedian!

What the critics say about Lloyd Griffith:

“Inherently funny, voice of an angel, body of a trucker” – Chortle

“I’m a sucker for a fat boy who sings like a girl!” – Comedy Central

“He’s amazing, absolutely amazing” – SO Television
Following the huge success of the June show with Kevin Hayes and Luke Ryan, we expect this show to be even more popular, so we strongly recommend making reservations early to avoid disappointment. Tickets are just €9 per person in advance or €10 on the door. Tickets can be purchased in advance online or with cash from Goblins Pub, Dunajska 29. To purchase online, just click here. Those who prefer to pay in cash at the door on the night can still reserve seats by emailing: reservations@babybluebanana.com.