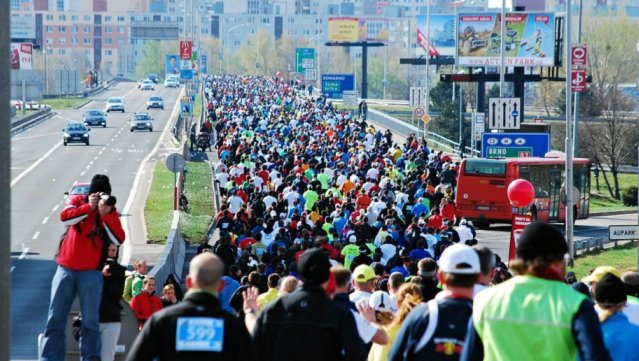 Thousands of runners flooded the streets of Bratislava this weekend as marathon time hit the capital. The 7th ČSOB Bratislava Marathon itself was a bit like a refreshing wake up call after an annoying winter, but not just for professional runners.

There were all kinds of disciplines available – the Sheraton Barkeepers’Run on Friday, the Kids’ run, Hobby run and 10K run on Saturday, followed on Sunday by the Relay race, ČSOB/Eurovea Shopping Marathons and a half marathon, and let’s not forget the Inline racers. There were also various accompanying events organised so people could leave their homes and soak up the atmosphere of the bustle of events – concerts, theatre and dance performances, Friends pasta party etc.

The culmination of the ČSOB Marathon started on a rather chilly Sunday morning around Eurovea, where men and women of different ages and nationalities gathered for their runs.

Six buses were ready to take relay racers to their designated points in Petrzalka, with a total of 330 teams of 4 runners registered for the relay race. Employees of various companies like Allianz Business Services, ČSOB, Dell, IBM, ING Bank, Lenovo, Pharmacum Plus etc. were all represented, with a lot of creativity in their choice of name – the Absinthe Running team (my team), Lads Don’t Rush, NO IDEA, Rum 4 Mamateyka, Svieža Štvorka, PBS Pink Ladies, , Pánsky klub, Office cougars, Birrel Rulers and so on.

The race had a truly international flavour with ex-pats from around the world making the most of the special day. Miguel from Portugal, for instance, completed his 12th half marathon, to add to the 4 full marathons he has under his belt. He says it’s very important not to overdo it with training a short time before the ‘big day’, which is why he tries to make it 3 times a week for 1-3 months before. He also says runners should be ready for the worst external conditions that are out of their control, like the weather and the route. But the most important thing is to arrive at the finish line and continue in good health!

Preparation was not only necessary in terms of getting into good physical shape, but also in the choice of team name. Two male members of the PBS Pink Ladies team, Torsten (Germany) and Miro (Slovakia), for example, explained that they were proud of the feminine side of their nature and female team members Laura (UK) and Michaela (Slovakia) are posh. So it was easy to make the decision. On the other hand, preparation for the run itself took much longer, as this was the first run any of the PBS Pink Ladies had taken part in. For them, training started in the winter and was twice a week, increasing the distance from week to week up to 6-7 km in order to make the 5km relay distance.

Our team, the Absinthe Running team, admit that the decision to take part in the Relay race came spontaneously while partaking in an Absinthe. Preparation started around February, but it wasn’t the first run ever for myself Katja (Latvia), Pancrazio (Italy), Giorgio (Italy) and Adam (Slovakia).

Despite the changing weather, which seemed like a cruel joke on April fool’s day, including wind, snow, sun and rain, many supporters came out to encourage their families and friends. My friend Mazvi from Zimbabwe confesses that she’s “more of a supporter than a participant when it comes to running. There was a good atmosphere by Šafárikovo Námestie. It was a little challenging at times standing outside as the weather was extremely fickle. Who knows, maybe I will run next time, if it is for a maximum of 3km.”

By the end of the day, I believe there was nobody who wasn’t fully satisfied with the day. And who knows, we will probably meet again very soon for the Devin Run (11.62K) on 15 April.

You can see the full results of the Bratislava Marathon here