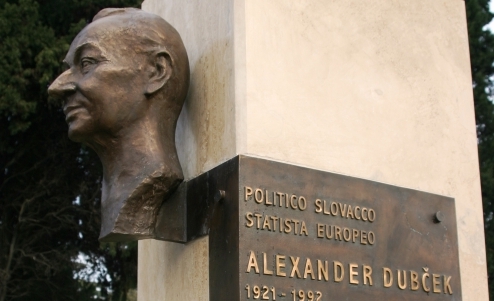 On a gloomy day in Italy, top dignitaries from Italy and Slovakia congregated for the solemn opening ceremony of “Largo Bratislava”, which now houses the bust-monument in memory of Alexander Dubcek by sculptor Igor Mosny.

Following the ceremony, the Head of State spoke about the bust: “Dubček was a real champion of the ideals of freedom and autonomy and also Slovak independence. “

“I had – he added – the chance to meet and establish a relationship with him in difficult times. The fact that we are gathered together shows how old ideological conflicts have been overcome and we are truly the foundation in Italy, because we recognize a set of common values, those recognised in his time by Alexander Dubček. “

Minister Frattini, who praised Napolitano for his role in the condemnation expressed by the old Italian Communist Party, the PCI, for the invasion of Czechoslovakia by the Warsaw Pact, stated that the monument is not only to keep alive the memory of an important statesman, but it also shows that you can end up in the shared values of the political spectrum, regardless of origin. “

In this respect, the minister pointed out that “those values for which Dubček fought proved that whoever is ready to commit and sacrifice themselves for pluralism, for the fundamental rights of the individual, can identify himself fully with the highest and most universal heritage of liberalism and democracy “.

“We are honored to inaugurate the monument dedicated to an exemplary patriot and statesman for the young Italians who were many times mobilised to support and accompany his battles. A great European leader who staked his own freedom and life for ideas, and he did this during one of the lengthiest and darkest seasons of European history,” declared Mayor Alemanno. He also emphasised Dubeck’s consistency during Nazi times, at the Prague Spring and, finally, the Velvet Revolution.

Alemanno, also stressed the central position of Largo Bratislava, near the foreign ministry. “It ‘s an area that will host the 2020 Olympics, at an intersection of music and the arts, with the axis-Maxx Auditorium, and the sports area of the Foro Italico and Olimpic Stadium. “

Attending on the Slovak side (in addition to the Slovak Ambassador in Rome, Stanislav Vallo, and the sons of Alexander Dubcek, Pavol and Peter), were Deputy chairman of parliament Pavol Hrusovsky.

Of particularly poignancy was the address of the Slovak Ambassador to Italy, Stanislav Vallo, who together with the President of the Slovak Republic, Ivan Gasparovic, was among the main instigators for erecting the memorial as a token of friendship between Italy and Slovakia.

Pavel Dubcek, president of the association that takes the name of the father, said: “For a long time I have wondered why my father had chosen such a difficult path full of danger and defamation. He could have lived comfortably for life. “

The eldest son of the great statesman of Czechoslovakia then continued: “Luckily, he was not alone in the world because a world without ideals would fall. The principle of my father was to raise the dignity of human life and his path of democracy without violence has left its mark in the world. I am grateful that Rome has not forgotten him and has done this in his memory. “

At the end of the unveiling ceremony, the congregation moved for the opening of a photo exhibition entitled: Alexander Dubček – his life and work. ”

Although the official celebrations ended at the close of the day, the words of the great statesman continue to echo:

Democracy is not only the opportunity and the right to express one’s opinion, but also a guarantee that this view is taken into account by those in power, with the ability for everyone to play a real part in decisions . “(Alexander Dubcek)