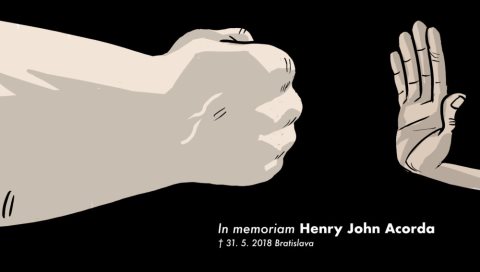 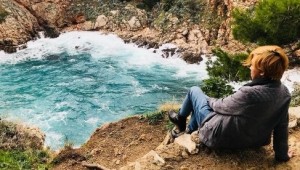 Around 2 pm on Thursday 31 May, Henry John Serafica Acorda († 36) from the Philippines drew his last breath of life at Ruzinov hospital in Bratislava, succumbing to a brutal and senseless beating he had received five days previously from 28-year old Juraj H from Dunajska Streda.

The incident has touched a Slovak nerve, causing a wave of discussion and concern, possibly as the undertone of racism and hostility to foreigners has raised its ugly head once more. The case has been assumed by the Regional Prosecutor and will be overseen by the General Prosecutor, with even Prime Minister Peter Pellegrini issuing a statement saying it reflects “very bad signals for our society”.

Henry was a very friendly and gentle man, small in stature with a non-conflicting personality. He was transferred to Slovakia last year to take up the post of financial manager with an international IT company based in Bratislava, a city he had made his home since. I met him on a few ocassions by way of his very good friend J, also from the Philippines, who sadly had to witness Henry’s slaying after he came to her rescue early in the early hours of Saturday 26 May. News of the attack reached me on Monday morning after our mutual friend called me. My heart went out to J as I could not even begin to imagine her trauma and grief.

That fateful night Henry was with J and her friend M, with everything great until the moment they encountered Juraj H and who they assumed was his friend at a fast-food pizza bar near one of the busiest junctions of the city.

It was around 4.30 AM, Juraj H and his friend started questioning J, asking where she was from and then what age she was. After she told him her age, Juraj H suddenly grabbed J by the arm and said they were going to get a taxi. J resisted, but she is just a small woman and so Henry attempted to intervene to save his best friend from being abducted. The heavily-built  JH turned on Henry, who was trying to flee with his friend from the man, knowing he had no chance against someone twice his size. 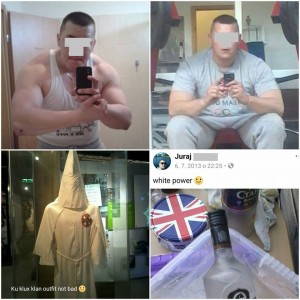 Juraj H pursued and caught Henry, punching him hard to ground, hitting his head as he fell. As the aggressive attacker took his first kick into Henry’s stomach [correction: he kicked him unconscious in the head], his friend J begged the other man to stop him. The other man reacted by refusing and fleeing the scene entirely. At the time of print, we could not determine if the police had detained the other man for questioning yet.

According to reports, JH then proceeded to kick and punch the motionless Henry in the head, causing massive fatal internal bleeding. Henry stood no chance, either in such a one-sided fight or in his battle for life. Alerted by the horrified screams of the girls, the police quickly arrived at the scene, where they arrested JH.

Henry was resuscitated and kept alive thanks only to the swift action of the police and medical services, but he was declared brain dead at the hospital before sadly passing away around 2 pm on Thursday 31 May.

Shockingly, the perpetrator was released a day after the hideous incident as the Regional Prosecutor ruled there was no evidence that he would “commit a similar action”. The prosecutor’s rejection of the investigator’s petition to detain Juraj H at that time has been widely criticised, and so the General Prosecutor is now also overseeing the case. The killer was rearrested on Friday, the day after Henry passed away in hospital.

Juraj H now faces charges of manslaughter with a possible sentence of 7-12 years. According to our sources, the Philippine Consulate General in Slovakia has also become involved and has hired a lawyer to help with the case. 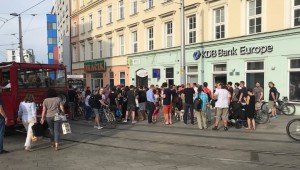 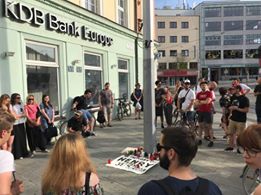 A group of over a hundred people gathered silently on Friday evening to mourn Henry’s passing at the site where he was attacked. A few words were said by someone from the For a Decent Slovakia movement, while people lit candles, laid flowers and held silent thoughts. The trams slowed as they past, either due to the crowd or out of respect. A larger remembrance called Justice for Henry has been organised by anti-racist groups for Wednesday 6 June, 6pm on SNP square.

Henry’s family have flown to Slovakia and a special fund has been set up to help them with all the legal and funeral expenses at this difficult time. Please donate a little here if you can: https://www.gofundme.com/support-henry039s-family

Henry’s death has stirred some strong sentiment not only among foreigners, but also many Slovaks who are well aware that certain segments of their society see some lives as less worthy than others. Much anger is being expressed because such a brutal and horrible incident puts a dark stain on their country, the country they are battling constantly to improve and advance, especially in recent times.

Having lived here for 28 years and as I am very much in touch with the so-called foreign community here, I can say that there is almost nobody among us who has not encountered some kind of discrimination, bias, racism or threat, simply because we come from another country. Even so, I have always boasted about how safe it is here and how little street violence there is, and to be fair, Slovakia is hardly alone in Europe nowadays when we talk about anti-foreigner sentiment and such incidents could and do happen also in other countries.

The crucial  difference, though, lies in how a society subsequently reacts to it, deals with it and endeavours to prevent it being repeated. In Slovakia’s case, so far it seems an example will be made of Juraj H due to the sheer senseless brutality and underlying racial nature of the attack.

While nothing can bring Henry back, maybe his death can serve to raise awareness in certain people who harbour such sentiment and aggression, make them think twice and possibly save future victims from similar inhuman attacks. For the rest of us, Henry’s act of courage should inspire us all to call out more the racism and other discrimination we encounter on a daily basis, whether on a bus or in the street, from a friend or colleague, and promote the value of live and let live. RIP Henry John († 36)