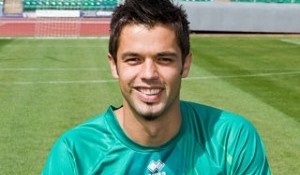 Peter started his career playing for youth teams in Bratislava, capital city of Slovakia before moving to the Czech Republic where he was initially signed by HFK Olomouc.  From there he moved to 1. FC Brno in the top flight of Czech football.  Peter spent several seasons at Brno before earning the opportunity to move to England.  In 2006,  Peter was signed by Swindon Town, where he went on to make 66 first team appearances.  After trials at various clubs, Peter eventually ended up on the south coast of England, where he played 20 times for The Seagulls in the 2009/10 season.  This season Peter is an important member of the Brighton squad currently top of League One and has featured in each of the FA Cup games in an ongoing winning run which sees his team face up against Watford, from one division higher, in the 4th round.

Peter is a player who has given everything in pursuit of his career as a professional footballer and I am delighted to have the opportunity to ask him a few questions, right here, exclusively for Britski Belasi:

Peter, can you tell us a bit more about where you grew up?

Yes I grew up in Bratislava, it’s brilliant I love Bratislava, I was born there and always go back there to visit my family, so that’s city number 1 for me.

After a trial I went to HFK Olomouc, I spent 1 year there and after that I moved to Brno which is Premier League in Czech Republic – they chose me.

Do you remember a certain moment when you knew you were going to make it as a professional footballer and was that always your dream?

Yeah definitely, when I became a senior, everyone told me I could make it so I just went for it and luckily I became a pro in CZ.

Is there a specific person who really helped or motivated you during the early days?

Absolutely, I always needed someone who would push me forward, sometimes I got so frustrated and there were many good guys who stood by me and helped me get through everything.  I would say Jakubicka was one of the coaches who helped me a lot.  He was a goalkeeping coach in Bratislava and he helped me move to the Czech Republic as well so I was really happy to work with him.

Which team did you support when you were growing up?

I did like Slovan Bratislava, it’s a big team for me, it’s a club in Slovakia, quite famous, that club has good history.

Who was the most talented player you played with at Brno?

I would say Petr Svancara and Milan Pacanda were so talented, it’s just they liked many different things more than football so it didn’t go as well as it could, but definitely the biggest talents I’ve seen.

What really stood out about them?

They were very young and I don’t know how was the support from their family but they were very good, for example Pacanda had an offer from the Italian league when 17 or 18. He was a very good player but he had problems off the pitch.  It just didn’t go as well as it could have for him and he had a bad injury as well.

What was your finest moment in Brno colours?

Mr first appearance for Brno was great – we played Sparta Prague and it was a great experience, I just enjoyed that time.

How about an away game against FC Slovacko in 2006 where you saved penalty after penalty in a shoot out?

You’ve got a reputation for saving penalties!

It didn’t mean so much for me – at that time I didn’t play for the first team and cup games are not like here in England, for example with the FA Cup, it’s not such a good level so I just took it as I took it, no big deal.

Yeah of course I have a look sometimes on the website and speak with guys who are still playing there but most of my best friends who were playing there left Brno so I don’t follow it that much now but I still have a look where are they in the table.

What are your thoughts on the situation at the club at the moment?

They are struggling but I think they just need a bit of luck to get back where they belong!

There isn’t much information on your time at Inter Bratislava.  Did you make any appearances?  Did you meet Fillip Mentel?

No I didn’t meet him, I was spending my time with Jakubicka and from the start, my loan there was not the best.   I made it back to the goal and then I did well but in the last game I knocked a player over and got a red card so that was it for me with that loan deal – I went back to Brno.   It was still a great time for me because I was living and playing in my home town Bratislava.

The club then merged with FK Senica – was it sad that Inter Bratislava disappeared and had to merge with another club?

It’s a big shame because Inter had a history and I’m just quite sad about that because as Slovakian football goes, you know I don’t know if the chairmen who run these clubs go the right way.  They should support these teams with a big history and it shouldn’t happen what just happened.

To read the rest of the interview, go to BritskiBelasi