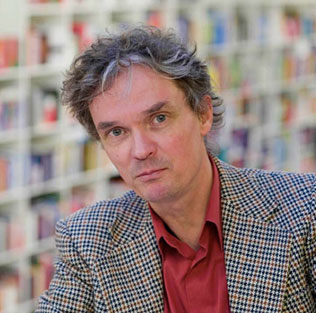 When you first meet Abram Muller, it’s easy to see him as a character plucked directly from a charmingly picaresque novel. He never ceases to entertain you, teasingly provoke you, surprise and amaze you. As we will find out later ‘amazement’ is a key word in understanding Abram Muller.
But for now, let’s continue our biographical sketch the way Charles Dickens opened his novel, David Copperfield:

What does he like?
We don’t stray from the truth when we say he doesn’t simply like literature, he inbibes it. His extensive knowledge and genuine love of literature only adds to his skills as a conversationalist. He’s quick to link every day events to classic scenes in world literature, which guarantees vivid and captivating descriptions of his surroundings and past experiences. As a conversationalist Abram likes straightforward and direct questions, since he doesn’t suffer shallow chit-chat gladly. If literature isn’t really your cup of tea, no need to worry. Also history, culture and travelling never fail to tickle the man’s attention.

If it’s true that you are what you eat, then we may conclude Abram is a good and hearty fellow. On his dinner table you are likely to find, wholesome ‘honest’ farmers’ dishes (no haute cuisine) and quality drinks (no cheap beers).

When it comes to being sociable, he prefers to surround himself with his best friends and ordinary, hardworking, the salt of the earth type of people. As so many in modern-day society, he’s divorced, but, interestingly, his former wife is still his closest companion.

For years he was a lecturer at the Comenius University, but right now he works as a tourist guide, a job that he is really passionate about. His company is called Amazing-Slovakia (for link see below) and energetically promotes Slovakia abroad. His deeply rooted familiarity with Slovakia has lead him to pick up the writer’s quill. He is the author of Rustiek Kamperen Tsjechie&Slowakije (revised edition to appear in April 2011), Wat&Hoe Slowaaks (revised edition to appear in April 2011) and of Dominicus reisgids Slowakije, which is to appear, close to the end of 2011. The latter is the first ever originally written in Dutch guidebook about Slovakia, with a thorough analysis of the country’s history, culture and its people.

His wish is to one day go back to the Netherlands and pick up his first and best job ever, namely that of bridge-keeper (‘brugwachter’ in Dutch). When he retires he plans to live near the sea-side and read from A to Z and from Z to A the complete, ‘Ideeën’ by Multatuli. 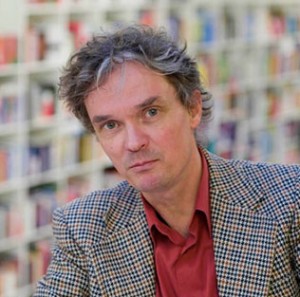 1 Dear Mr Muller, can you tell us what it was that drew you to Slovakia as a young man and then glued you to it, so unmistakable, quite like an intimate symbiosis, so to speak?
As a young man I opted for ‘Eastern European Studies’ (Ruslandkunde – in Dutch, or Sovietology – in French). It was the era of the ‘iron curtain’ and I felt a naturally deep solidarity with oppressed European nations like Czechoslovakia, Poland and Hungary. I was also deeply frustrated by the seemingly indifferent attitude my countrymen and the ‘free western world’ in general, had in regard to the fate of these countries, that were so obviously ‘shackled’ by the Soviet-Union.

I felt myself unable to simply stand by and watch this progress impairing East-West deadlock. So I decided to travel the above-mentioned countries yearly and I did so from 1982 onwards. In Poland I habitually contacted members of Solidarnosc, which may people of my generation will remember as an energetic, galvanizing and freedom-loving movement. The first time I visited Czechoslovakia was in 1986.

As a result of my unorthodox itineraries I was interrogated by the Dutch police about my contacts with dissidents of ‘befriended’ nations like Poland, which proved to me the double standards of the political climate of those times. Immediately after the fall of the Wall I decided to settle in the above-mentioned countries for good, first in Poland, but when I received an offer in Bratislava, I moved to Czechoslovakia. I fell in love with a woman there and the rest is somewhat of a cliché, where the reader can fill in the particulars. To quote the wonderfully terse writer, Kurt Vonnegut: ‘So it goes, so it goes.’

2 Your company is called ‘Amazing-Slovakia’, can you name the top five most amazing things about Slovakia?

3 When Dutch tourists come to Slovakia what do you think they expect to find before they arrive? And do their expectations prove to be correct?

They have no expectations, as they have really no idea what Slovakia is like. But those that do, have this strange notion that Slovakia is a poor and sad country that should be avoided. They usually arrive here after years of visiting the Czech Republic, carefully stepping on Slovak ground, not knowing what they might run into. There is some fear of the unknown. Another way they arrive here is by Danube cruise-ship, but those ships only visit Bratislava for a few hours.

As soon as they spend a bit more time here, their expectations are soon proven to be incorrect. They generally like Slovakia and are surprised by its progress and natural beauty. In general tourists – men and women – are surprised by the women on the streets who according to them look particularly well-kept, manicured and very slim with a proud posture. Then after a few days they wonder why these ‘same’ women are sometimes somewhat rude in providing services (post-office, restaurant waitresses, hotel receptionists etc.) But this is also part of Slovak society and I myself appreciate it very much. If a receptionist is in a bad mood, well, she won’t try to hide it. On the other hand, if she’s in a cheerful mood, she’ll also let you know. I rather like this sincerity. There’s nothing make-belief about the Slovak character. What you see is what you get.

4 What do you think Dutch tourists appreciate and enjoy the most about Slovakia?

5 Based on your long experience living and working in Slovakia, could you share with us some undiscovered natural or cultural treasures Slovakia boasts?

Nothing is undiscovered in Slovakia, for tourists it holds no secrets that have yet to be described, though the very east of the country has yet to be visited by tourists
It’s a paradise for specialists, like explorers of caves, birdwatchers, butterfly specialists, rock climbers, biologists observing wolves, bears, lynxes, or for socio-anthropologists observing the Slovak way of life and Slovak behaviour, traditions, cultural reflexes etc.

6 Do you know of any prejudices foreigners commonly hold towards Slovakia, that are really false assumptions or conclusions based on half-truths?

There are no prejudices concerning Slovakia, as most foreigners have never even heard of the country. And if there do exist some prejudices, then it is “poor and sad”. Luckily I also know some foreigners who think Slovaks really know how to party. Some people who would remember yesterday’s newspaper articles would connect Slovakia with Roma, but without any deeper understanding of the situation.

You once drew our attention to a passage in Bram Stoker’s famous book Dracula, namely:

‘The strangest figures we saw were the Slovaks, who are more barbarian than the rest, with their big cowboy hats, great baggy dirty-white trousers, white linen shirts, and enormous heavy leather belts, nearly a foot wide, all studded over with brass nails. They wore high boots, with their trousers tucked into them, and had long black hair and heavy black moustaches. They are very picturesque, but do not look prepossessing. On the stage they would be set down at once as some old Oriental band of brigands. They are, however, I am told, very harmless and rather wanting in natural self-assertion.’

Is there some truth in it? And was Bram Stoker a keen observer or was he jumping to conclusions? I myself find it rather negative, because the first things that struck me about Slovaks is how friendly they are and this sincere warmth they all seem to radiate so generously. Perhaps you, in your long-time experience, could comment on this colourful extract?

First of all, we have to keep in mind that Stoker was a writer. Count Dracula did exist, but certainly not in the way Stoker describes him. So too, do Slovaks exist of course, but not entirely as Stoker describes them to us. He never even visited this part of the world, but wrote Dracula in the library of his hometown in Ireland after thorough studies on Transylvania. He must have stumbled upon some obscure chapter about Slovaks. So I won’t comment on his writings, as they are absolute fabulous. And thus perfectly true, but only in their own, uniquely literary way.

7 Slovak and Dutch culture have a lot in common, but naturally there are also some differences. Could you point out some of the most noticeable differences?

The first things that come to mind are these:

8 You have taught, let’s say an entire generation of Slovaks who wanted to learn Dutch, can you tell us in what way acquiring knowledge of Dutch added value to their lives?

Learning a language in general always broadens one’s horizon, thinking, knowledge and insight. Concerning Dutch I’m prone to say it gave them the possibility to get in touch with a different culture. First through the teacher (me) and their studies, then by actually spending time in the Netherlands. Students found out in the end that luckily there is nothing special about the Dutch, they are just like anybody else, an interesting people among may interesting peoples. So in the end this gave Slovak students a boost in self-confidence, which I do admit they were in need of.

9 If a Slovak had only one week to spend in the Netherlands, what are the places, towns, museums, festivals etc, he or she should absolutely visit or experience?

First day, shock-day: visit Kampen or some other extremely protestant town, preferably on a Sunday
Second day: visit Rotterdam, its harbour and its incredible multi-ethnic population
Third day: Den Haag and its parliament, and Scheveningen sea-side
Fourth day: Museum day: War Museum in Arnhem and Kröller-Müller Museum in de Hoge Veluwe
Day 5, 6 and 7: Amsterdam, do all you want but never dared to do for these 3 days, experience Amsterdam 100%

10 The same question, but for Slovakia, if one has only one week to spend in Slovakia what are the must-see, must-visit, must-experience places and cultural events?

And to conclude, we have to add bonus questions number 11 and 12. What is the best Slovak beer and/or wine? And lastly, when a Dutch sports team, be it in soccer or hockey, plays a Slovak team, who do you cheer for?

The best beer is Zlaty Bazant 12, but not because it is owned by a Dutch brewing company! Heineken as such is not my favourite beer. I also enjoy a lot of local beers throughout the country, the produce of small breweries.

Wine is easy. I recommend most any wine from this most northern wine district in Slovakia: www.pivnicaradosina.sk/