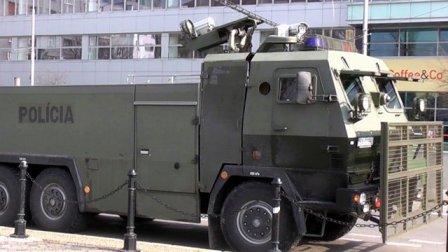 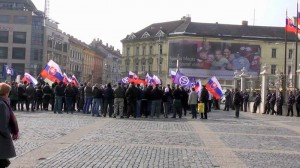 On 12 March 2011, the Slovak nationalist groups Ludova Strana Nase Slovensko (‘Our Slovakia’ People´s Party) accompanied by the infamous Slovenska Pospolitost (Slovak Togetherness) gathered on Hodzovo Square in front of Presidential Palace to commemorate the establishment of the Slovak war-time state, baptised by Dr. Jozef Tiso, claimed to be Hitler´s puppet, on 14 March 1939.

The even was attended by roughly 250 participants, of whom around 40 were mere observers and news reporters. The most noticeable aspect of the gathering, though, was the heavy presence of police rather than actual participants of the nationalist organisations. 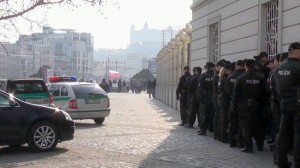 As the rally got underway, three youths were detained by the police and led away to a police station. The youths had allegedly been arrested for wearing the double cross of the Hlinka Guard, which is a traditional symbol of Slovakia, on suspicion of inciting racial hatred. Each youth was escorted by four armed police officers. 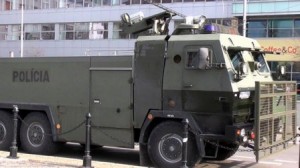 Of course, the rally ended peacefully with a march to Tiso’s symbolic grave at Martin’s Cemetery. The question that lingered in my mind, though, was whether it was really necessary to have so many police standing there idle during the rally. Would it not be more cost effective to keep the police patrolling other areas nearby and have them on alert to respond immediately to any potential violence at the rally? Was it really worth exposing other areas of the City of Bratislava to potential risks?

At the end of the day the police released the detained youths without charging them, as they had only been detained on “suspicion”. 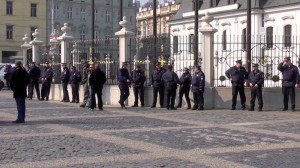 Often the level of police presence at events in Slovakia is overstated, and sometimes the police outnumber those taking part in the specific march or demonstration. True, sometimes the presence is exaggerated through paranoia that things are going to get out of control, even though in some cases like certain football matches this is always hard to judge. These matches and events are costing the taxpayers huge sums of money on a regular basis due to the need for a strong police presence, but maybe less of a presence would provide the same degree of deterrent in a country like Slovakia, where police authority is generally well-respected.