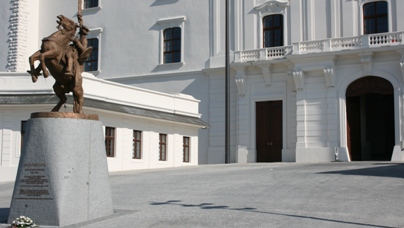 On Saturday, right-wing extremists went on a march to the much-disputed statue of King Svatopluk that was installed at the entrance to Bratislava Castle under the former government. The statue has been the centre of heated discussion over the suitability of the statue and its historical accuracy.

The special committee that was set up to decide on the fate of the statue looks set to move the statue or remove it altogether.

The organisers Ľudová strana Naše Slovensko (LS NS) referred to the event as ‘National March to the Statue of King Svatopluk II’, saying it was intended to “unite all Slovaks and Christians who are not indifferent to the fate of a traditional Slovak and Christian symbol: the double-barred cross”.

Chief organiser Marian Misun said thhe event was also “to show all those parasites that we feed in Parliament with our taxes that we won’t be broken by some political witch-hunt or by political bullying and police brutality”.

The police were informed about the event and so prevented the extremists from entering the castle grounds. After some jeering and outcries, the demonstrators moved to a nearby street, where LS NS chairman Marian Kotleba and his party colleague Marian Misun gave speeches about how they saw the political situation in Slovakia.