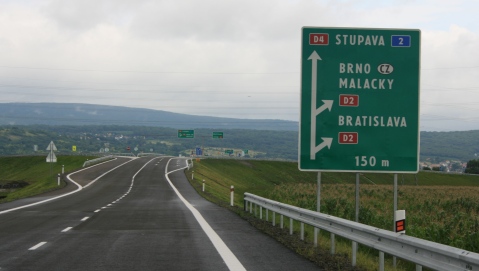 Today transport minister Jan Figel officially opened the long-awaited D4-bypass motorway feeder junction between Stupava and Bratislava, which will ease up traffic to and from Bratislava along the road to Zahorska Bystrica and help the Volkswagen plant enormously.

Thanks to three years of construction work and a cost of over EUR 23 million, now commuters on the western edge of Bratislava should no longer have long journeys to work in the slow-moving traffic between Zahorska Bystrica and Lamac, which was being used by everyone from the town of Stupava and the surrounding villages (e.g. Marianka, Zahorska Bystrica, Borinka).

Another benefit will be evident at the junction in Lamac, where long queues would converge every evening as people traveled home from work. This T-junction was the scene of very frequent accidents due to the strong congestion of traffic with no traffic lights. It was also the entry point to the motorway for many people travelling towards Brno as the next junction was not until Lozorno.

The motorway feeder also means trucks can cut off or join the motorway almost directly at the VW plant, instead of driving on to the Lamac cut-off and then travelling along side roads in the direction to Devinska Nova Ves.