The Baby Blue Banana entertainment group is back for its monthly night of comedy and laughter in Bratislava, with Dave Thompson topping the bill. 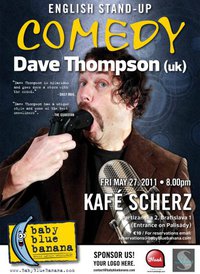 Baby Blue Banana: Dave Thompson is one of our favourite ever comedians who has already performed many times for us in Budapest, Prague and elsewhere but this will be his first time in Bratislava. He is flying over specially from the UK to do this one show!

This will also be our first Friday evening show in Bratislava, after so many of you requested that we try and do some weekend dates.

Dave Thompson is undoubtedly one of the funniest comedians on the circuit. He is a master of one-liners and manages to combine an eccentric style with a genuinely likeable character. He is also very comfortable and experienced performing to international audiences. Dave rose to TV fame as the controversial children’s character Tinky Winky in the Teletubbies but his real talent lies with more grown-up comedy. He has appeared many times on TV and radio and has also written for some of the biggest names in comedy. He regularly appears as the “side-kick” of Harry Hill on TV and on stage and has also been seen many times alongside the likes of Ben Elton and Al Murray.

As usual at our comedy nights, you can expect plenty of laughs and a few surprises along the way too, at our regular home venue, Kafé Scherz. Tickets are just 10 Euros per person.

The April show, with Stephen Grant, was completely packed, so don’t forget to make your reservations early to avoid disappointment. Just email reservations@babybluebanana.com and let us know how many tickets you need.

With an excellent support act and plenty of surprises, this promises to be a superb evening of entertainment. Don’t miss it!