As of today women in Slovakia are effectively working for free! Expert Market has released its annual report revealing the date that women effectively stop being paid around Europe, thanks to the gender pay gap.

The​ ​Date​ ​Women​ ​Stop​ ​Being​ ​Paid​ ​In​ ​Europe Expert Market, the UK’s leading B2B service comparison site, has released its annual report, which, based on the gender pay gap, reveals the date that women effectively stop being paid around Europe.

Using the most up to date gender pay gap statistics from Eurostat, the report calculates how much unpaid time the gender pay gap in each European country equates to and so determines the date that women effectively start working for free each year.

From this week onwards women in Slovakia are effectively working for free.

The research revealed that Estonia remains the worst country for the gender pay gap with the biggest difference between male and female salaries of all the European countries. Women in Estonia stop being paid on 23rd September which means they work for free for over three months! Though their gender pay gap has improved from 30% last year to 27% this year, there is still a substantial gap to close. 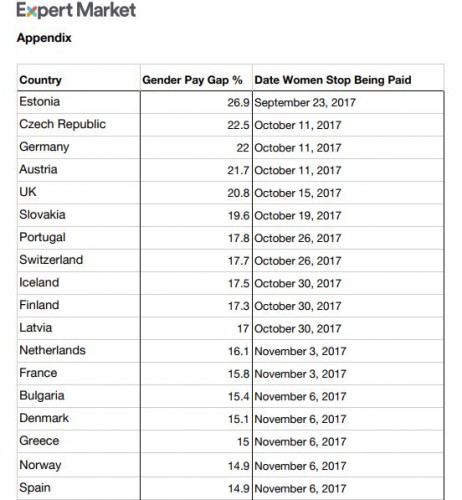 The UK’s gender pay gap also came under scrutiny as a result of the research. The study found that the gender pay gap in Britain (21%) is still worse than the European average (17%). Women in the UK stop being paid on 15th October whereas the average cut off date for Europe is 30th October. This shows that women in the UK work unpaid for two weeks longer than the European average and overall, work for free for two and a half months of the year.

Jessica Laporte, of Expert Market comments: “This study brings the far reaching effects of the gender pay gap into clear focus. It is absolutely astonishing that in the 21st century women are still suffering such financial penalties merely because of their gender. I hope this report encourages women across Europe to continue to campaign for gender equality in the workplace and in society as a whole.”

The full report can be viewed here.