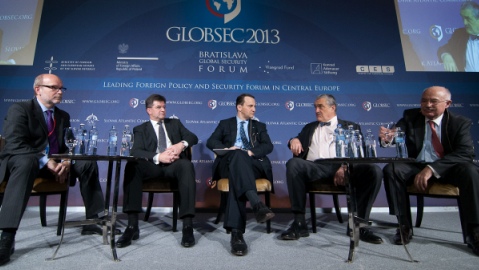 Bratislava is currently the venue for the international security conference Globsec 2013, with defence ministers and chiefs from around the world meeting to discuss issues of global security. 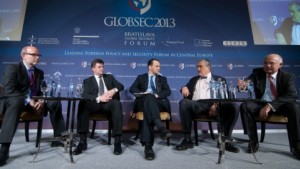 As part of the conference, the Visegrad four presented their plans on closer co-operation between Slovakia, the Czech Republic, Hungary and Poland in the field of security, by way of a common declaration drawn up by the Slovak Ministry of Foreign Affairs. Here is the full wording as provided by the Slovak Atlantic Commission.

“For a More Effective and Stronger Common Security and Defence Policy”
We, the Ministers of Foreign Affairs of the Czech Republic, Hungary, Poland and Slovakia, reconfirm our commitment to strengthen the EU’s ability to respond to security challenges including through the instruments of military and civilian crisis management. CSDP as a key instrument in dealing with conflict and crises deserves regular attention and support at the highest political level.

The forthcoming December 2013 European Council should express the EU’s political determination for a more effective CSDP by taking stock of current state of play and providing further strategic guidance An adequate follow-up, including a timetable for concrete steps should also be set up to ensure systematic development of CSDP. The EU’s approach must be based on political will, financial realism and multinational cooperation.
Strong and stable transatlantic partnership is our shared and vital interest. Strengthening CSDP should go hand in hand with reinforced partnership with NATO.

Increase the effectiveness, visibility and impact of CSDP
The EU´s comprehensive approach offers a unique advantage to increase the effectiveness, visibility and impact of CSDP. Civil-military interaction, as well as a greater internal and external coordination and cooperation should be at the heart of our actions. Importance should be given to the whole conflict cycle including conflict prevention, mediation and an enhanced early warning capability.
The upcoming joint Communication on the comprehensive approach by the High Representative and the Commission as well as the revision of the CSDP crisis management procedures and the EEAS review are closely interlinked. Their outcome should provide further impetus to build higher degree of coordination, and to enhance the EUs ability to react quickly and effectively with various CSDP instruments.
CSDP missions and operations have proved their positive impact in various conflicts so far. Further increasing the effectiveness of CSDP should be underpinned by enhancing rapid launch and deployment through better planning, as well as financial, logistics and human resources procedures, and Member States´ active contribution to the execution. Better implementation of lessons learned in future CSDP planning is also needed. From this perspective the sustainability of EU operations and missions’ achievements should be ensured. We acknowledge the role played by the EU Operations Centre bearing in mind the Council Conclusions from December 2011. We should further explore the possibilities for improvement and synergies in planning of missions and operations.
EU Battlegroups continue to be an important tool for rapid response, transformation of armed forces and enhancement of interoperability. As a result of our joint effort we will provide Visegrad Battlegroup in 2016. We support the work on enhancing flexibility and usability of this rapid reaction capacity, especially further exploring broader use of regional and partnership cooperation. In order to increase the willingness of Member States to use EU Battlegroups, burden sharing of its deployment and redeployment should be ensured.
A more effective CSDP means a more responsive capacity to cope with emerging security challenges. That is why we should be prepared to defend our interests in the field of cyberspace and energy security.
The role of CSDP should be further enhanced in EU’s overall partnership policy. Cooperation with partners is necessary to deal with security challenges successfully. Strengthening ties with the Eastern Partners is a particularly promising avenue. The EU and NATO, as natural partners, should work closely together, and their actions must reinforce each other. Further improvement is also needed in the EU-UN relations regarding the crisis management and peace support.

Enhance the development of military capabilities

Capability development is a long term process that requires strong political support, fostering a clear strategic vision and predictable defence budgets. To maximise its effectiveness and efficiency, the capability development should be based on a single set of priorities introduced by the Capability Development Plan as its central element. At the same time, it should make use of the new pattern of European defence cooperation introduced by Pooling and Sharing. Regional initiatives and projects are a particularly promising way of mitigating identified shortfalls and overlaps between EU and NATO as they increase coherence at regional as well as European level. Harmonisation of EU and NATO defence planning should be strengthened.

We appreciate the activities of the European Defence Agency and encourage it to continue to play pro-active role in supporting the Member States in their effort to improve defence capabilities in the field of crisis management and facilitating the defence co-operation among them. To do this effectively, there is a need to preserve Member States’ ownership.

Strengthen Europe´s defence industry
We need to continue working towards a more competitive and transparent European Defence Equipment Market (EDEM) and strengthening the European Defence Technological and Industrial Base (EDTIB). It is essential to establish a long term, competent and sustainable EDTIB and to promote European solutions to defragmentation of defence industry based on harmonized equipment and service requirements and defined key industrial capabilities. Equal and fair conditions within the EDEM, including the transparency in procurement procedures, must be reinforced. Wider participation of small and medium sized enterprises as vital drivers of innovation are prerequisites to foster competition. In order to strengthen EDTIB we will support identifying and addressing key technologies and industrial capabilities that should be developed in Europe, as well as areas of technological and industrial non-dependence utilizing prioritised coordinated investments, and enhanced and trusted security of supply. Moreover, investment into defence research and technology should be supported through common projects and programmes with dual use applications and identification of further possibilities of cooperation in Research and Technology, including by examining further alternative funding schemes and opportunities.