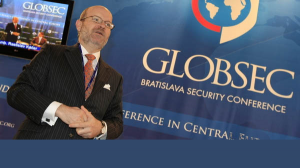 On Wednesday 2 March the Kempinski Hotel in Bratislava will be host to top security officials from all over the world, as they descend on the city for the GLOBSEC 2011 security forum. This year the forum will be the biggest yet, with around 70 key speakers.

One of the main topics of this year’s GLOBSEC Bratislava Global Security Forum will be energy security from the point of view of the V4 countries. The importance of energy cooperation is emphasised by the recent agreement between the governments of the Slovak Republic and Hungary about the construction of a gas interconnection.

This, as a part of the North-South gas pipeline, will become a significant part of the European energy network. The Slovak Atlantic Commission, organiser of the GLOBSEC Bratislava Global Security Forum, published a study about the possibilities of energy cooperation among the countries of the Visegrad group as a part of the Visegrad Security Cooperation Initiative (VSCI), last summer. In the study, an international group of experts recommended, among other things, the same North-South connection, which would facilitate the diversification of gas shipments through terminals located in Poland and Croatia.

The 6th annual GLOBSEC Bratislava Global Security Forum (2-4 March) will be taking place alongside a meeting of the Ministers of Foreign Affairs of the Visegrad Group and the Eastern Partnership countries. The influence of this event is evident by the choice of topics and speakers, who will be addressing the perspectives of closer cooperation in the region.

The year 2011 represents a unique opportunity for the Visegrad countries to increase their influence in the European Union as important topics for the Central European region will become a part of the EU agenda, thanks to the Hungarian and the ensuing Polish presidency.

Priorities of the Hungarian presidency – energy security, a pan-European strategy of Roma integration, budget and agricultural policy, recovery of the Eurozone and the continuation of the EU enlargement process, give an assurance that the needs and interests of the region will be handled on the European level.

The event is organised by the Slovak Atlantic Commission under the auspices of the Foreign affairs minister Mikulas Dzurinda and in cooperation with the European Commission Representation in Slovakia, the Ministry of Foreign Affairs of the Slovak Republic and the NATO Public Diplomacy Division.