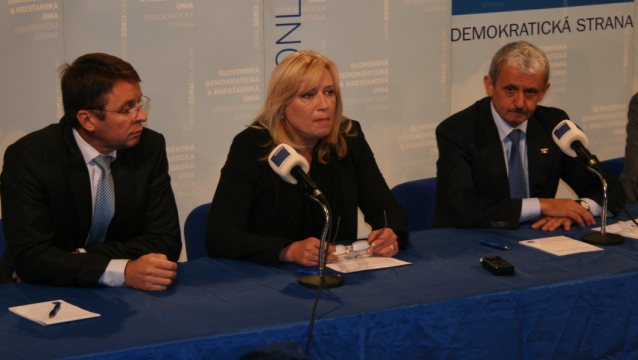 The near disastrous result (6.09%, 11 seats) in Saturday’s early general elections for the SDKU-SD party led by Mikulas Dzurinda has raised questions over whether ‘Miki’ shouldn’t have stood down before the elections and paved the way for either vice-chairs Lucia Zitnanska or Ivan Miklos to use the pre-election period to reclaim lost voters.

At the last party congress before the elections, justice minister Lucia Zitnanska said she would be willing to take the helm of the party if the members wanted it, while also noting how the voice of the voters would be crucial to the issue. Now she believes the people have spoken, giving a clear signal that it is time for a change in the party and so will be challenging Dzurinda’s leadership.

In terms of individual preferences, Zitnanska got almost four times as many votes as Dzurinda, with 103,517 people electing her to represent them in parliament, compared to just 27,242 for Dzurinda.

Finance minister Ivan Miklos also got more than double the votes of Dzurinda, with the support of 56,771 of the party supporters, but says he is not interested in leading the party, also because he feels partly responsible for the party’s bad result. Rumours are spreading that Miklos is planning to surrender his parliamentary mandate and take up an interesting offer abroad instead.

Dzurinda, who accepts responsibility for the bad results, says he welcomes and is even pleased by Zitnanska’s decision, so now he may have to reconsider his future in the party that he set up back in 1999 when prime minister. Dzurinda’s position and future should be discussed later today at the party’s board meeting.

Zitnanska promised that if she were to lead the party she would do everything in her power to get the party back to where it belongs on the Slovak political scene, considering the party had over 15% of the vote as recently as 2010. The demise of the SDKU-SD party was brought on in the past few months chiefly due to the corruption allegations in the Gorilla affair.