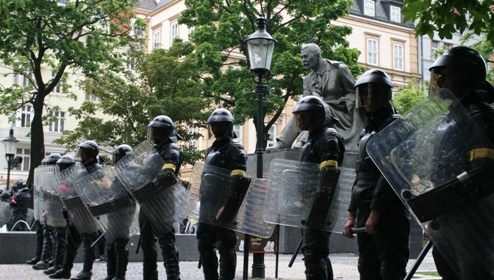 A debate has been going on in recent weeks about the approach of the Slovak police to Gorilla protesters and whether they have used excessive force even without provocation at the various demonstrations to date.

At the most recent protest on 9 March just one day before the elections, police used tear gas indiscriminately and allegedly attacked peaceful protesters. This has has led one of the demonstrators to filing a criminal complaint with the Attorney General’s Offfice.

The complaint comes from Mr. Stefan Potocky from Kalna nad Hronom and is against how the police intervened in the protest and the use of excessive force against citizens. Potocky provided a statement to the media stating how he had taken the decision to file the complaint after interior minister Daniel Lipsic  had defended the police conduct as justified, especially as protesters were allegedly throwing cobblestones at them. Potocky has supported his complaint with pictures and videos showing that action was taken despite the protest being peaceful.

One of The Daily’s readers who was at the protest and saw what happened had the following to say:  “Yes, I was there and I do not call myself an extremist. I have a masters, I never ever hurt anybody and I have never had a problem with the police. This was no messy incident. A special force commando (trained for fighting organized crime) was used against the people of Slovakia who just wanted to have their voices heard. Our constitutional rights have been broken that day and on top we have been assaulted by our own government. The “police officers” had their faces covered. They had no badge of identification, no number, no nothing! Nobody knows who gave the orders to use the means that were used. People in front of the police were singing the Slovak anthem and were sitting peacefully on spot with their hands above their heads. If there was a small group of trouble makers, the police should have taken them one by one.  The water cannon was not used. Instead teargas several times, police batons, small explosives were thrown into the crowd by the police forces and on top a hand held weapon for rubber projectiles was used against the ones that tried to get to cover”. He also provided us with some video links of the incident: