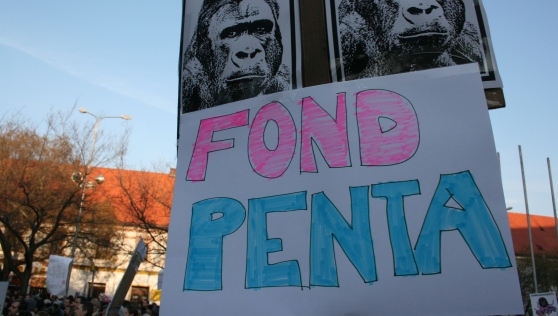 The Protest Gorilla civil movement is calling on the new government of Robert Fico to change certain nominations that the protesters feel are dubious, with potential crony ties with financial groups.

Specifically, the movement is demanding the recall of freshly appointed health minister Zuzana Zvolenska and economy minister Tomas Malatinsky, as they both worked in companies under the wing of Penta financial group, which has been targeted for alleged crony ties with political figures in the so-called Gorilla corruption affair. It recently came to light that Malatinsky has also been renting out his house to Penta partner Jaroslav Hascak, so questions are being asked about his true relationship to the financial giant.

In a statement provided to TheDaily.sk, the protesters say they back a demonstration organised by Vizia 21 for 24 April on SNP Square in Bratislava entitled “Protest Against Penta in Government” as there is justified suspicion that these nominations are strategic and basically laughing in the face of citizens and voters of the Smer-SD party.

The protesters underline how “with a smile on his face” Robert Fico nominated people who used to work for Penta to specific sectors where the financial group has business interests. They therefore want both the ministers either to stand down or be recalled, and are calling on other political parties, civil associations and initiatives, and disgruntled citizens, to support the protest.