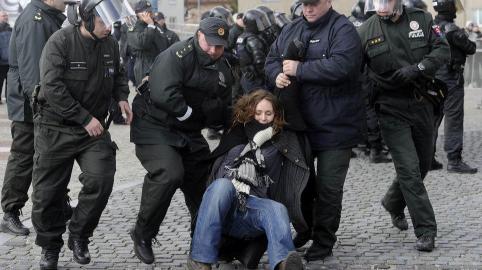 It was only a small group of a few dozen determined Gorilla protesters that targeted Parliament on Wednesday, but they tried their best to make up for the lack of numbers by the trouble they were causing.

The police eventually arrested five of the protesters, including organiser Lucia Gallova, for standing defiantly between police and protesters. a group of police officers dragged here away by force in the end. Three others were also charged with similar obstruction charges, while one 56-yr old man is being charged with attacking a police officer, as he allegedly punched him repeatedly as protesters were trying to break through a barricade.

Initially, they had been refused entry to parliament, but security officers eventually let them in as it was their constitutional right, but under the condition that they would behave. Once they got into the National Council hall, some started shouting abuse at MPs and throwing paper down from the gallery.