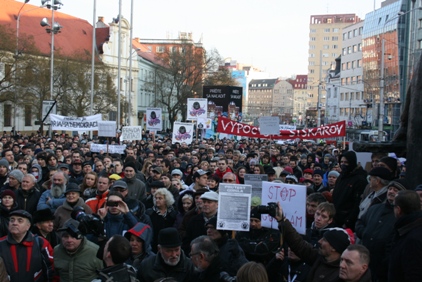 The Gorilla protest organisers are not giving up on their efforts to change the system and eliminate crony ties between politicians and financial groups as much as possible, but now that the elections are over, they might find it increasingly tough to get their voice heard.

The last protest in Bratislava just one day before the elections got a bit messy again, with police eventually using water cannons and tear gas on a small group of over-zealous demonstrators. This trouble-making faction of the group was clearly identifiable already at the gathering point on Namestie Slobody earlier in the afternoon. A total of 19 demonstrators were eventually arrested in the incident, which the organisers claim involved excessive police force and brutality.

Now the protest organisers are getting serious with a whole range of plans that they will implement through a new initiative they have set up called Civil Movement – Protest Gorilla. Peter Pcolinsky from the initiative informed TheDaily.sk that the idea is to provide citizens with information about the state of society, affairs and corruption, as well as to act as a kind of central “voice” in relation to the Slovak government and Parliament.

The Protest Gorilla initiative is already preparing an internet portal that will provide up to date news about political affairs, society and public administration, with a blog so that people can submit their own thoughts. The determined activists have also launched their own internet TV, which will be used for broadcasting discussions, reports and promoting the initiative’s events.

The organisers also plan to hold public discussions on a regional level and so are currently putting together expert teams on various areas in the hope of weeding out “the apathy of Slovaks about topical issues and invoke hope in them that with our concentrated efforts we will be able to participate as active citizens in the running of the country” states the Protest Gorilla press release.

The founders of the initiative are hoping the number of volunteers will rise along with the voluntary contributions they receive, because that is the only source of financing for all of the above plans.