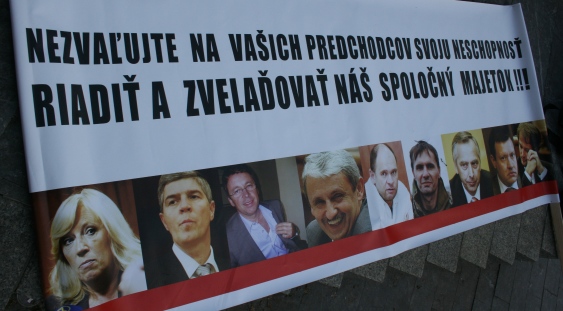 Tomorrow Wednesday 29 February, the  Gorilla protesters are planning to block all the exits from parliament until MPs cancel their immunity to criminal prosecution, among other issues.

The protesters will surround parliament while the last session is taking place inside,  refusing to let them out “until they approve the abolition of MPs immunity to prosecution from all crimes”, announced Peter Pčolinský from the organisers, and so is even advising people to get ready for a long stay and bring along sleeping bags. The protesters also plan to stage a protest at the same time outside the headquarters of financial group Penta.

The protesters have already sent a demand to PM Iveta Radicova to include the point in the session agenda, so they are hoping she or someone else will take the step. If the amendment is passed, highly unlikely as Robert Fico’s Smer-SD party and Jan Slota’s nationalist SNS party are both against the move, the protesters expect it to be signed immediately by the President, the PM and the Speaker of the house and enacted.

The other demands of protesters include the creation of an appointed non-partisan government and the dissolution of five political parties,   SDKÚ, Smer, KDH, Most-Híd and Ordinary People and Independent Personalities (OĽaNO). They have therefore requested the Attorney General’s Office to take the unusual step.