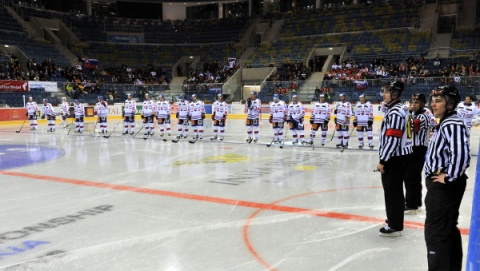 The Slovak hockey team has its work cut out for it tonight against world No 1 Russia, with both teams wanting the win to go through to the next round as high as possible. 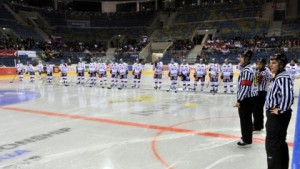 Slovakia faired better than the Russians against both Slovenia and Germany, but the Russians are never to be taken lightly, something that all the players and head coach Glen Hanlon are well aware about. It would be sad if Slovakia were to lose again, especially after such a brave last-minute comeback from 4-0 down against Germany to end the match 4-3. Too little too late, though.

Coach Hanlon announced yesterday that he would not be adjusting the team much for the game against Russia, as he was “relatively satisfied with the play of the attacking lines in the third period against Germany”. Hanlon lamented how the Slovak team had not taken advantage of the powerplays in both the previous games, against Slovenia and Germany, while both the opponents managed to utilise weak spots in the Slovak defence.

Hanlon pointed out that there is no reason to make changes as the team so far had had many chances, but just failed to convert enough of them. He believes Slovakia had more than enough chances to be able to win against Germany.

The Slovak-Russia match looks set to be one of the most exciting of the tournament, something that is definitely true here in Slovakia. The nation is rallying behind the team and maybe that slight home territory advantage and the desire not to let the country down as the host nation will be enough to beat the mighty bear of Russia.