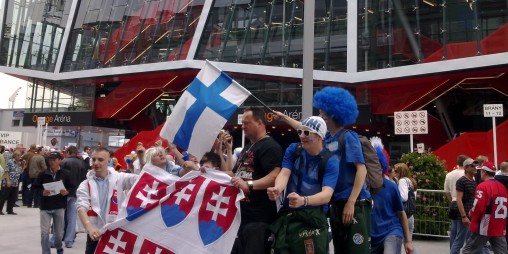 They did it! The Slovak ice hockey team took out the favourites Canada in the quarter finals of the IIHF World Championships in a closely fought match after they scored a crucial goal by Michal Handzus just two minutes from the end to win 4-3.

Slovakia took an early two goal lead, but the gap was closed for Canada by Evander Kane to end the first period 2-1. Canada knew what they had to do, though, and so came out fighting in the second period.

It wasn’t long into the second period before Canada equalised, thanks to a good move by Jeff Skinner. The Canadians closed the second period with a third goal by Alexandre Burrows, as Slovakia’s hopes started to evaporate.

The third period was the decider, though, and with just 6.5 minutes to go the Slovak players perked up and managed to get a great equaliser. This, boosted by a power play, spurred the Slovak team on to score the winning goal in the dying minutes thanks to a bluff shot by Handzuš.

This takes Slovakia through to the semi-finals in the first time in eight years and with a chance of a medal. They will meet either Sweden or their jinx, the Czech Republic.