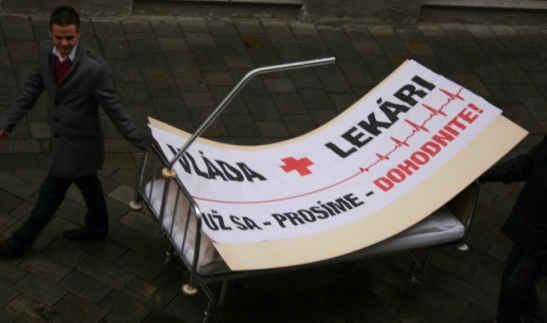 In a last ditch attempt to stop the whole health service in Slovakia from collapsing and being unable to serve the population, the Ministry of Health has been holding closed-door talks since morning with the doctors trade union LOZ in an effort to draw up legislation that would guarantee higher salaries for doctors.

The draft bill is more or less ready, but both sides still have to agree on the actual rate of increase. Health minister Ivan Uhliarik assured the now 1,200 or so ‘unemployed’ doctors that if an agreement is struck, they will receive their jobs back.

The government hiked up its pay offer to the doctors from EUR 300 a month to a gradual rise  to 1.25-2.3 times the national average wage by 2013, but that offer wasn’t fully accepted either and so everything still hangs in the balance. Many doctors are losing patience as well, with some taking to the streets of Bratislava with a megaphone and hospital bed today, saying they had had enough and demanding that an agreement be found now.

The 1,226 hospital doctors who did not take back their notices this week and who are now officially unemployed, have been called to work by the government declaring a state of emergency in specific locations. The number of them suddenly going on sick leave is rising, though, and some have escaped the call-up as their permanent residence is outside the hospital catchment area.

Neither side got entirely what it wanted in this battle, though, and so a deal could be in sight as they probably realise that now, while people all over the country have suddenly found themselves with no healthcare. Better late than never.