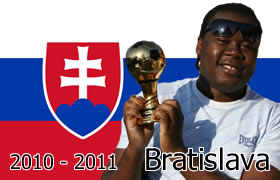 Mid-way through the 75th Ice-Hockey World Championships in Slovakia, on a field not too far from the centre of Bratislava, a festival of international football is brewing.

On Saturday 7th May, Mlada Garda plays host to Tournament Heaven’s opening 7-a-side event of 2011. Teams include local Slovak teams, resident teams from Africa, South America and the mixed bag of foreigners who make up the team of The Daily. The tournament is made even more cosmopolitan with the addition of teams from England, Italy and Luxembourg flying in specially for the event.

With group games starting at noon, the matches will be fast and furious as teams jostle for qualification places. Once the group games are completed, teams then compete in the knock out round with the finals at 16.40 to ascertain the 2011 champions!
Tournament Heaven was established last year, although the organiser has been running the Pociatek Pohar tournament here in Slovakia since 1998. Teams are still sought for Desenzano on 4th June and if you’re going to watch Slovakia play Ireland in September in the EURO qualifiers then you might be interested in the Dublin event in September; a Slovak team won it last year!
Come along and give some support.
For more information on this event or future tournaments, check out the Tournament Heaven website: http://www.tournamentheaven.com