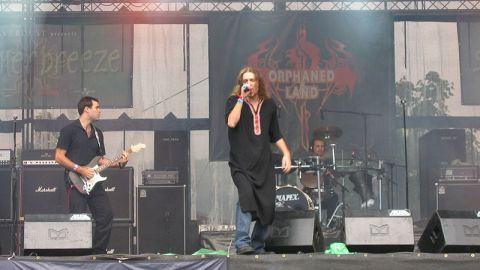 “We are not a religious band, by the way.. I may look like Jesus Christ, but my name is Kobi and I’m a big sinner..”

Orphaned Land (Israel) -Randal, Bratislava. I was particularly excited to see the Orphaned Land concert for several reasons. Firstly, it had been a while since I had been to a metal concert. Secondly, because the mix of Middle Eastern melodies and rhythms with heavy metal is captivating, hypnotizing, and sexy.

The Israeli band is currently on tour promoting their new album, All Is One. The album features over 40 musicians, so I was especially curious to hear how the songs would sound with the basic touring line-up (drums, 2 guitars, bass, voice). My curiosity was cured already in the first song. The sound was incredibly powerful and rich, with additional female vocals and sound effects being sampled in.

The lead singer, Kobi Farhi, had complete control of the crowd from the first moments;  in addition to his charisma and mysterious aura, you could really feel how experienced he was with being on stage as a frontman. The musicians were flawless and the band ripped through song after song with a set-list that spanned their entire 20-year career / discography. The audience, to my surprise, seemed to be very familiar with both old and new material, gladly clapping, stomping, and chanting along to odd time signitures and oriental melodies.

Later in the set they were joined on stage by a Palestenian singer from one of the opening bands, who provided excellent growl vocals to several tracks. Farhi used this opportunity to explain the band’s position on the Israeli/Palestinian conflict (“Fu**in’ bulls**t”), noting that while they were perfectly capable of living on one tour bus with 24 people of mixed religious and cultures, politicians could hardly manage to sit down at the discussion table.

“After all, we have the best religion in the world, no? Heavy metal!” concluded Farhi, as the band dove into an encore of their best known, and in my opinion, best material.