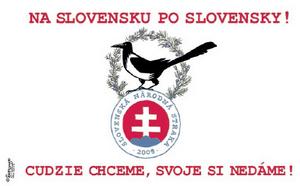 Head of the nationalist SNS party, the ever controversial Jan Slota, is taking the daily SME newspaper to court over abuse of his party’s logo.

Slota has requested the public prosecutor to charge SME because they replaced the eagle on the party’s logo with the image of a magpie. The author of the image is famous charicaturist Shooty, who is no newcomer to being sued over his political satire drawings.

The image was published at the beginning of February as part of an opinion poll asking people to vote on whether Jan Slota or his former party colleague Anna Belousovova was most trustworthy, and was accompanied by one of Shooty’s older creations.

In his submission to the public prosecutor, Jan Slota is claiming that the eagle image has been replaced by a cuckoo bird and not a magpie, to which Shooty reacted saying “maybe they can’t read”.

The SNS is arguing that their logo and name are registered trademarks, while the caricaturist Shooty is arguing that he did not use their logo, but a caricature of their logo. In response, editor-in-chief of SME, Matus Kostolny, pointed out that the whole point of a caricature is irony, and that he hoped it would be perceived that way, the same as it is in the ‘democratic’ world.

Slota, unhappy with Kostolny’s explanation, is demanding that criminal prosecution be initiated and that criminal liability be imposed. Leader of the other opposition party Smer-SD, Robert Fico, failed in his demand for EUR 33,000 in compensation for a Shooty drawing referring to him as spineless, so hard to say what chances Slota has of winning his case.