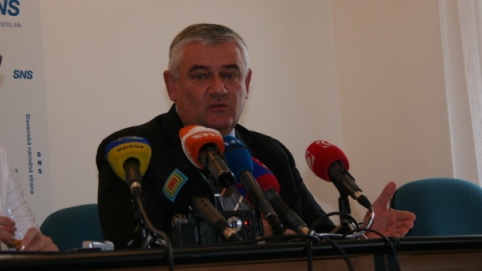 Some would say that head of nationalist party SNS Jan Slota was taking a risk when he recently went into a Roma settlement to speak to the locals, as their opinion of him is generally not so positive.

Slota ventured into a 1,400-strong Roma settlement in the village of Podskalka near Humenne together with others from his party to ‘discuss’ Roma issues with the people on the ground. There was no egg throwing, though, and the people were open to discuss issues with Slota, who told them that the main thing was “to get a job”.

The move coincided with a meeting of the SNS top members in Humenne on Saturday, at which they strongly criticised the use of EU funding for the Roma. The party is claiming that EU funds that have been earmarked to tackle Roma problems are being badly used.

Slota complained about how the money is being channeled, saying that the EUR 200 million or so that Slovakia should soon receive for Roma affairs would be better used if given to local government instead of through the third sector, i.e. NGOs and the various Roma initiatives and representative organisations. Slota expressed that the money being distributed in this way has been magically vanishing.