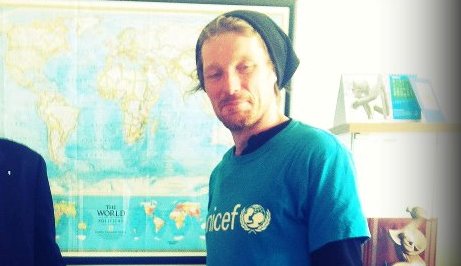 We have maybe all had that feeling at some point when you just want to start walking and keep going, but how many of you could imagine literally walking around the world? Not hopping on a plane or a train, but simply going for a stroll?  Anyone? You only need a good helping of strong will, belief in yourself and the strength of character to leave everything and everyone behind.

After finishing university and working as a fashion photographer in Edinburgh, this was precisely the goal that 30-yr old James Thomas from Ireland set for himself – to go for a stroll from Scotland to New Zealand.  He sold off all his material possessions, left his family, friends and his beautiful Latvian girlfriend, and set out on his personal pilgrimage. Now passing through Bratislava, The Daily caught up with James over a few beers to find out more about his quest and get a deeper insight into what drives him.

James’ motivation is not only to follow his dream to see every corner of the world and spread his experience through pictures, blogs and probably a book in future. He is walking the world also in aid of UNICEF, as he knows well the good work the organisation is doing all over the world, and so he hopes to raise as much as £ 1 million for projects and also awareness in people that even a little can do a lot.

James had always wanted to visit the polar opposite of his small village of birth in Ireland, which happened to be a small rock isle on the New Zealand coast, but he wanted to get there in a more unorthodox way. One day he decided to walk to a photo shoot near Edinburgh,  and it was then he decided his journey to the other side of the world would be by foot.

A year of physical and mental preparation followed, with very few people believing he was really going to cross 3 continents, 15 countries, 2 deserts and over 20,000 km in around 2 years. When asked about where he gets his strength of character to take on such a colossal task, James has to mention his grandfather and his stubborness. Once he got an idea into his head, nothing could sway him – he even built his own hovercraft!

The adventure started in Edinburgh at the beginning of January, crossing England, the Netherlands, Germany and Austria, before arriving in Slovakia for a longer pit stop after 3.5 months. The final destination will be the second-largest city in the South Island of New Zealand – Dunedin. James explained that going from Edinburgh to Dunedin made sense because the name Dunedin comes from Dùn Èideann, the Scottish Gaelic name for Edinburgh, and the N. Zealand city was is in fact the Scottish capital’s twin sister, with same street layout and even a castle.

It is not the first time the young adventurer has been to Slovakia. His fourth visit, in fact. He has a special relationship with Bratislava, where he has good friends and has had only good experiences with ‘the little big city’.  Giving a talk to a group of teenagers in Spojená Škola Gymnázium of Bratislava about his journey and voluntary benefit for children in Africa, meeting with UNICEF Slovensko members, being interviewed by Slovak radio, participating on TV show, have all kept James busy in Bratislava for the past week. On Monday 23 April James will leave the capital and head east for the next week through Samorin, Dunajska Streda and on to Sturovo, after which he will enter Hungary.

Having a conversation with James late Thursday afternoon was like being on a pleasant adventure into his memories and experiences, as his openness, natural light smile and positive attitude give you the feeling that impossible is nothing! He has no complaints and is confident he can deal with whatever the journey throws at him (he has been through the 2004 siege of Kathmandu, conflicts in Palestine etc). He is well aware also of what awaits when he has to cross the Iranian and Australian deserts, as both sections will take around 2 months each. This will be the toughest part of the journey, mainly because he has to carry 2 weeks supply of water on his little push buggy to survive the test of the desert.  When asked about his biggest fear about what the journey could do to him, James said it was that he might never be able to settle down, and so may be fated to keep circling the globe.

James knows it is all for a good cause, though, and is highly supportive of UNICEF’s work. In addition to raising funds and lecturing for UNICEF as he goes, he hopes his journey will make people realise that even giving small amounts can make a big difference, as EUR 5 can feed a child in Africa for a week, for instance. So you don’t have to ‘stroll’ around the world, just have one or two fewer coffees, skip a beer or two and send money to a good cause, knowing you are helping children all around the world.

By John Boyd and Katja Nikolajenko