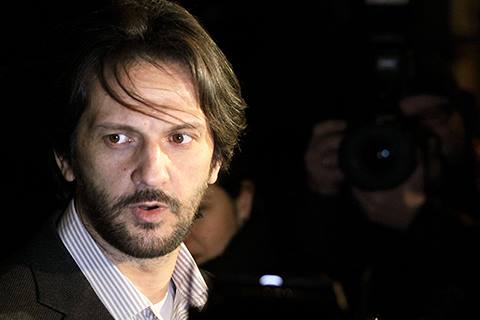 Two of the four students who had their car targeted and shot at by Slovak police in June 2013 showed up in parliament today to request an apology from Interior Minister Robert Kalinak and Police Commissioner Tibor Gaspar, only to be met with a show of ignorance second to none.

After minister Kalinak refused to meet the students who had suffered the terrifying experience, he was caught by journalists leaving the building, accompanied by the two students. Kalinak refused even to look at them, even though they were just two metres away, and when asked if he didn’t want to apologise to them, he said he saw no reason.

No reason to apologise, even though after the harrowing incident the students were then handcuffed and laid down on the motorway, before being subjected to hours of confusing interrogation, much of it in the rain. The young lady student, who was in parliament, even had to strip naked at the side of the road.

No reason to apologise for how the police had acted rashly and could have killed innocent people, no reason despite a police video recording showing the whole incident not being allowed as evidence, and no reason for the recording eventually being accidentally deleted from the camera [correction: they shredded it]. No reason to apologise also to the young man who has been without his driving licence since. Now he has to prove that he had misunderstood the police officers’ instructions at the incident. Pity there is no longer a recording.

The whole time being questioned by reporters, Kalinak refused to look at the students just to his side. It was a stomach-churning moment, when you realise the complete arrogance of certain people in power and the basic lack of decency to apologise to victims for the state’s negligence. Mr Kalinak sets a fine example to society.

Both the students were literally in tears at the minister’s inability to treat them like human beings, saying ‘”it is very very sad what goes on here in Slovakia”. Maybe the Police motto should be extended to write: To Protect and To Serve, but not to respect.