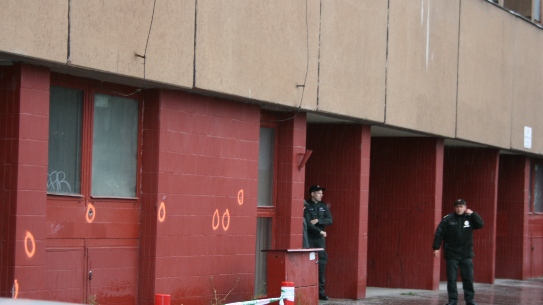 The shooting in Devinska Nova Ves yesterday, which saw 15 injured and carries a death toll of eight human lives so far, is looking more and more like the result of one unstable man’s frustration with his Roma neighbours, the Putik family. Neighbours in the vicinity have said that they were rowdy and problematic.

The as yet unnamed 48-yr old man was a direct neighbour of the family and allegedly had constant friction with them. The man was referred to as a loner who lived in a bed-sit flat and used to be in the armed services. After searching his flat the police found six firearms and a heap of ammunition, all of which were held legally with licenses. Initially the police said that the Vz. 58 machine gun that he used for his executions was not legal, but it turns out that he also had a license for that. It is the standard issue weapon for Slovak soldiers abroad.

He was on a mission to take out the whole family, and so shot down 5 members of the Putik family in cold blood in their flat. He then allegedly chased and shot the 6th victim Jozef Putik as he tried to get away. Putik had shown up at the flat looking for his 11-yr old son.

Thanks to the swift arrival of the first police patrol car in just 2 minutes, they caught the man just as he appeared outside and managed to keep him contained in one street, but from there he had a few pop shots at a bus stop, where he hit one woman, and tried shooting at the flats above, where he killed the 52-yr old lady who was later found dead in her flat by her now bereaved husband.

By then more police squads had arrived and managed to close off all his escape routes, effectively trapping him. A renowned Slovak psychologist explained later that someone with his mentality would rather take their own life than deal with the consequences of being condemned and put away behind bars, which is what he then did.

There are still 12 victims in hospital, 3 of which are in a very serious condition. The most critical of them is a man from the Czech Republic who was shot through the spine and also through the lung. He had an artery severed, and so lost a lot of blood, and although he has had the necessary operations, the next few hours will be critical to see if he makes it or not.

Another of those seriously injured is local resident Dominik Kapisinský, who took four shots from the machine gun to his stomach. He was on his balcony on the tenth floor of the block of flats when he got hit, so was very unfortunate. His condition has now been stabilised.

People lit candles in the street for the deceased in the evening and most people are in shock that something like this could happen in their neighbourhood.  Above a nursery school, next to a main road, and across from a local shopping centre.

The incident might just prove to be a catalyst for an eruption of public debate over how someone can own six weapons and a personal arsenal in a block of flats. The attack may not be racially-motivated, but is certainly seems to have been invoked by an intolerance of his Roma neighbours way of life.