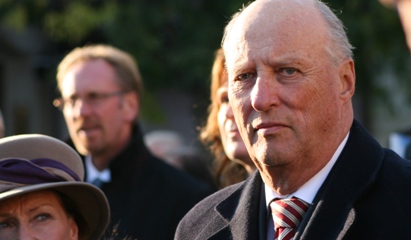 This afternoon the Norwegian royal couple took a small tour of the streets of Bratislava shrouded in bodyguards and journalists, and accompanied by Bratislava mayor, Andrej Durkovsky.

His Majesty King Harald V of Norway and Queen Sonja arrived last night on a four day trip to Slovakia, their first ever official visit to the country. In addition to Bratislava, they will visit also Banska Stiavnica and Modra.

Today the couple met with President Ivan Gasparovic, who is officially hosting their visit, and at a small news briefing afterwards King Harald underlined the good relations between the two countries.

Among other things, the two state officials discussed the funds that Slovakia receives by way of the Norwegian Financial Mechanism, referred to as the Norway Grants. Over the next three years Slovakia should receive around EUR 80 million in these grants.

King Harald said that Slovakia is still veiled in mystery for him because he has never been here before, but he is confident that he and his wife will get to know the country’s history and the mentality of the people better over the next few days.

The royal couple will also be looking at some of the projects that the Norway grants programme has helped fund.