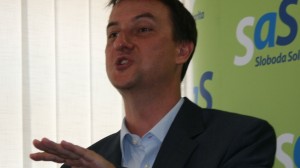 When it comes to freedom of the press, journalists in Slovakia have had it hard in recent years, having been taken to court by politicians over the simplest of remarks or caricature cartoons.

Even though Slovakia was recently placed 35th in the Press Freedom Index (October 2010), culture minister Daniel Krajcer is determined to amend the controversial Press Act introduced by the former government in a way that just might give journalists more freedom of speech.

In the amendment, Krajcer wants to limit the right of reply that is afforded to politicians and public officials. At a press conference yesterday he told reporters that public officials will lose the entitlement to have their reply published if the comments made concern their public function and not their personal matters. “They will still have the right to reply as private individuals. This is laid down in the Constitution” he concluded.

Even so, the revised Press Act will still allow politicians to get their own say, as a private individual, if the statements or accusations are damaging to their reputation, dignity or privacy.

At present all individuals and companies have the right to reply about anything they wish. Krajcer told the TASR newswire that the revision is only a small one and does not apply to online media.

This might not stop publisher being taken to court for huge sums of money, though, but it comes in the same week that Robert Fico finally lost his lawsuit against publisher of weekly Plus 7 Dni over its article ‘At the Throat of Imperialists?’. Fico was claiming compensation of EUR 33,000 over protection of personality.