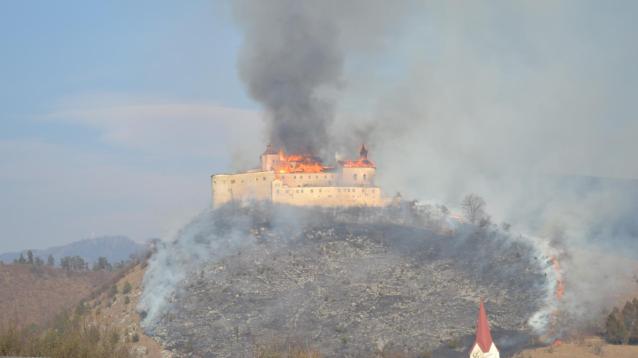 One of the best preserved castles in Slovakia, Krasna Horka Castle near Roznava, was victim to a raging fire at the weekend, seemingly caused by two local boys setting grass on fire nearby.

The dry shingle roofs of the majestic castle caught fire on Saturday afternoon, with the fire then spreading rapidly throughout the castle, which is a major tourist attraction and contains many valuable relics and exhibits as part of its museum collections. Fortunately, around 90% of the exhibits are safe and so will now be relocated to a safe location while reconstruction work goes ahead. The fire destroyed the Gothic Palace and all the roofs of the castle.

According to the police, two young boys said they were trying to light cigarettes on the hillside of the castle, but that they accidentally set fire to the dry grass. The floating embers must have then set the roof on fire. All the local residents rushed to the scene to help along with over a hundred firefighters and police.

Although the fire was brought under control in the evening, the castle started to burn again on Sunday, but firefighters had no problem containing the fire the second time.  The castle had just undergone major reconstruction work last year.