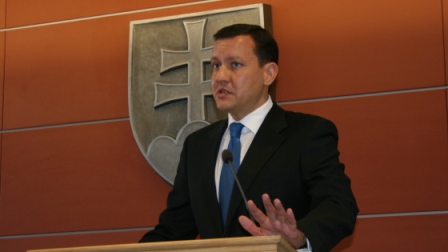 In light of the recent allegations from the leaked SIS secret service reports codenamed Gorilla, interior minister Daniel Lipsic plans to cancel the privatisation of Bratislava combined cycle heating plant PPC, on grounds that the deal was not above board and the price too cheap.

Lipsic announced the news at a press conference yesterday after he had filed a petition with the Attorney General’s Office to cancel the privatisation. Lipsic argues that there could have been some orchestrating going on between financial group Penta and public officials at the National Property Fund and the Ministry of Economy at the time 90% in the company was sold in 2004 to PPC Holding, which resides in the tax haven of Cyprus and is owned by Penta.

The company paid just EUR 66 million for the Bratislava plant, which Lipsic claims caused the state a loss of up to EUR 500 million because of a one-sided contract (still in force) with power producer Slovenske elektrarne, as prices for the generated electricity were 50% overpriced. He says this is one of the reasons why Slovakia suffers such high electricity prices at present.

Lipsic said he had decided to file the petition before Saturday’s election for fear that if he hadn’t, the case would be swept under the carpet. The responsible commission in the National Property Fund for the privatisation was led by Anna Bubenikova, whose is accused in the  Gorilla reports as accepting bribes from Penta and who was recalled from her post as a result. The allegation is that she may pushed through Penta’s bid.

Spokesman for financial group Penta, Martin Danko, rejected outright all of Lipsic’s claims, saying the tender had been highly competitive with 6 other reputed international bidders and so Penta must have offered the best terms. Danko pointed out that all the tenderers had submitted similar prices and so Lipsic’s claim about the price was ridiculous unless all participants had entered into a cartel in the tender, and also because price was only one of the criteria.