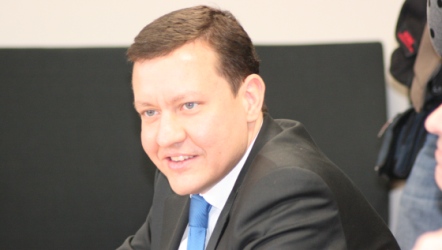 Former interior minister Daniel Lipsic has drawn attention to the contract on the sale of a 49% stake in gas utility Slovensky plynarensky priemysel (SPP), sealed between the state and the group Energeticky and Prumyslovy Holding (EPH) and how one of the owners of the private company, the financial giant J&T, had supposedly drawn up the contract itself instead of the Ministry of Economy.

Lipsic has therefore called on Prime Minister Robert Fico to a face-to-face on television to explain the whole affair. It has been no secret that PM Fico handed over control to EPH, owned by the PPF group, Czech billionaire Daniel Kretinsky and J&T financial group, by giving them managerial control over the two must lucrative subsidiaries of SPP, Eustream and SPP-Distribucie.

Lipsic, formerly with the Christian democratic KDH party but now an independent, pointed out how there is absolute proof in this case that the government has sold out to the financial group.

The company showing up on the file data is none other than J&T Investment Advisors. The government responded with a statement from economy minister Tomas Malatinsky, who claimed that they had sent the document for review, which, allegedly, explains why the company’s name is on the electronic data from the high-level contract. He put it down to the fact that member of the SPP board of directors advisor Miroslav Hasko used to work for J&T Investment Advisors and so was still using their computer.

Financial group J&T also reacted by denying the accusations outright, saying it had nothing to do with the elaboration of the contract documents. The company was acquired by the consortium of EPH and renamed to EP Investment Advisors instead back in 2010.

It may all be just a huge misunderstanding, but with the best of timing, EPH is now ready to surrender its 49% stake in the almost unprofitable SPP parent company, as EPH holds 49% stakes in the independent, and lucrative, entities of Eustream and SPP-Distribucia.