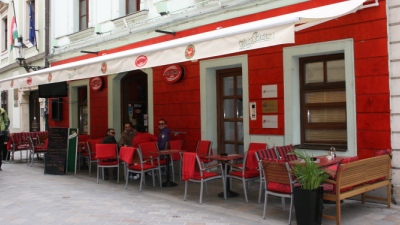 If you are looking for a safe lunch bet try Sedlárska street,  you might be pleasantly surprised. Today my compatriot and I pondered the boards outside The Irish, The Mexicano and the not-quite Hooters sports bar, which we opted for in the end.

All Stars got some bad publicity during the hockey championships with many regular ex-pats and locals alike grieving about the huge hike in prices, but it is a good bar and the staff are friendly. Today we decided to bask in the sunshine and partake of two bowls of soup, roast chicken breast with ham and cheese in a natural sauce and two 0.33l bazants for a mere €3.90 set price. Good value.

First to the table were our beers followed in close succession by our soups and last but not least the main event. Service on steroids is all I can say, which most people with their short lunch break will well appreciate. We murdered the soups, which were a mad mush of assorted veggies and hammy lumps and shavings, very tasty.

As our beer began to boil and bubble we were presented with our main courses. So the main event, hmmmmm, rice is rice, dull and boring unless served with a nice sauce with a meal like this. The  natural sauce was basically stock and flour, so it was pretty boring. The chicken was stringy, the ham was a slice of thin sandwich ham from a packet draped over the chicken breast and a dusting of cheese. Given the lunches we had there before, which were very good, this was not up to the usual standard.

The menu did look good: soup, a main course and a small beer for €3.90. I recommend keeping up the rapid service, serving the beer with the main course. Maybe the cook could work on the sauce, though. We like your pub, we really do, the ambience, and the generally cheery staff.