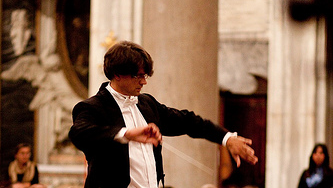 La Bohème, here performed in concert form, is an opera in four acts to a libretto  by Giuseppe Giocosa and Luigi Illica. Inspired by Henri Murger’s novel  “Scènes de la vie de Bohème”, this opera  is deemed to be a masterpiece of late Romantic Age, for its exemplary nature as to the synthesis of dramaturgy. It is divided into four sudden, fast acts (the original text significantly uses the traditional term quadri, i.e. pictures). In the opera, the story of a group of cheerful and carefree young is the background for a series of episodes which build up the plot of the opera, set in Paris in 1830.

The concert inaugurates the first edition of UmbriaMusicFest in the Czech Republic, in the framework of a series of events aiming at promoting Italian culture abroad. The year is also marked by the 150th anniversary of the Unity of Italy  and the UMF’s début will significantly take place in one of the most prestigious locations of Prague, the Rudolfinum. The event has been organized by Maestro Attanasi, internationally renowned conductor based in Prague, in collaboration with the Italian Embassy of Prague and the Italian Institute of Culture, with the sponsorship of major Czech institutions and entrepreneurs of the city of Prague.

UmbriaMusicFest boasts a longstanding collaboration with the Czech Embassy in Italy and in the Vatican City for its concerts. This activity aims at setting up a cultural network to promote Italian culture by establishing fruitful relations with the local cultural players.

Indeed, this performance of La Bohème entails the participation of the prestigious Bohuslav Martinů Philharmonic Orchestra of Zlìn, the Chorus of the City of Bratislava, the Children of Moravia, Chorus of  Holešov and a cast of international soloists.

UmbriaMusicFest is an international music festival, devised and directed by Maestro Walter Attanasi. The festival is active in Italy, Slovakia and South Africa; starting from this year in the Czech Republic too. Thanks to its valuable musical programme, it can count on major soloists in the musical arena and could impose itself as one of the most prestigious and rich events in its field. The artistic director’s highly professional career has attracted internationally renowned artists, coming from the most prestigious theatres in the world, thus creating a highly followed and applauded festival. UmbriaMusicFest has now reached its 11th edition, gaining great success among the public and critics.