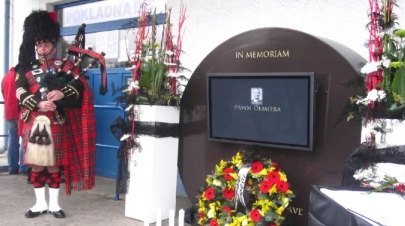 The Manchester United junior team, which is on a week-long training session in Poprad in the High Tatras, has paid its respects to the Lokomotiv Yaroslavl hockey players who died in a plane crash last month, including Slovak hockey legend Pavol Demitra.

The young players and team staff themselves requested the ceremony outside Poprad hockey stadium, which was accompanied by the lamenting tones of famous bagpiper Roy Sloane, who plays at special events for the royal family, for instance.

Also present was the juniors’ coach is Paul McGuinness, son of Wilf McGuinnes who fate saved from the Manchester United plane disaster of 1958 due to an injury. He did not get on the plane as a result, which came down near Munich and killed most of the United squad.