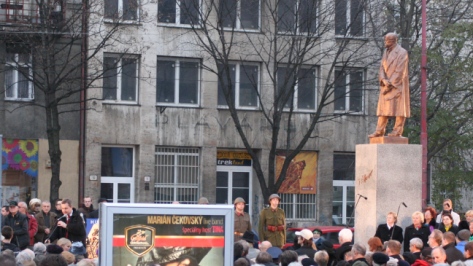 Yesterday marked the 92nd anniversary of the establishment of the first Czechoslovak Republic (1918-1938), and to celebrate the occasion a statue of its first president T.G. Masaryk was unveiled in Bratislava .

The 2m-high statue of Masaryk was placed on the pedestal in front of the National Museum, replacing the original bronze lion statue that occupied it for years. The ceremony was attended by several MPs, the mayor of the Stare Mesto district, diplomats and other officials, as well as a handful of demonstrators from the extremist LSNS party.

The demonstrators, who were almost invisible in the crowd of a few hundred people, were protesting against the unveiling of a statue of an “avowed enemy of the Slovak nation”.

The date of 28 October is still a national holiday in the Czech Republic.