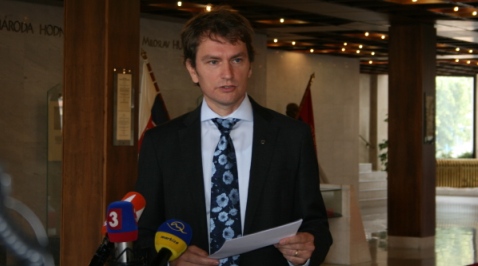 Igor Matovic, head of the Ordinary People and Independent Personalities party (OLaNO), couldn’t be more pleased with the results of the election, as his 4-month old party with an impressive 8.55% is now the third strongest in parliament and he himself got more candidate votes than anyone else on the right-wing bench.

Matovic’s political career started with the 2010 elections when his Ordinary People faction hopped on the back of the Freedom and Solidarity party (SaS), using his regional newspapers to get himself and his 3 party colleagues enough votes to get into parliament. The relationship was bumpy from the start, and it wasn’t long before Matovic’s controversial approach to politics saw him ousted from the SaS party to become an independent MP.

Matovic then registered his OLaNO party in November 2011, and has soaked up many of the floating votes of people looking for an alternative to the more established parties who have come under fire of corruption allegations recently. Matovic reinforced his integrity by taking a lie detector test to prove he had never taken or given bribes, for example, but in February had to say farewell to 24 of his key candidates who refused to do the same.

As soon as the results were in, Matovic made it clear that his party would be acting like a watchdog over the policies of Prime Minister in waiting Robert Fico. He wants to concentrate his efforts on exposing and eliminating corruption, making reference to earlier affairs under the previous Robert Fico government, saying he and his MPs would make sure a similar scenario is not repeated.

Matovic promises that his party will be constructive in the opposition, and that all of the party’s 16 MPs will never be forced to vote in line with the party, but according to their own convictions, and so if Fico’s Smer-SD party submits good laws, it can expect their support. He wants to see a new culture of co-operation in parliament, instead of the childish opposition games that have been seen to date.

As the most supported right-wing MP in parliament and head of the second strongest opposition party behind KDH (but with 16 mandates), Igor Matovic is now in the perfect position to exert his influence over Slovak political culture, in his own distinct and often controversial way.